Over 50 years of history in four fantastic new chronographs.

Zenith celebrated the 50th anniversary of its groundbreaking El Primero chronograph movement in 2019 with a series of watch releases that paid tribute to the original vintage examples in laser-accurate fashion. As part of the automatic chronograph movement’s golden jubilee, Zenith rolled out a series of “El Primero Revival” watches which resurrected the cases found on the first batch of watches to feature the caliber in 1969, including the rounded profile of the ref. A386 and the tonneau shape of the ref. A384. 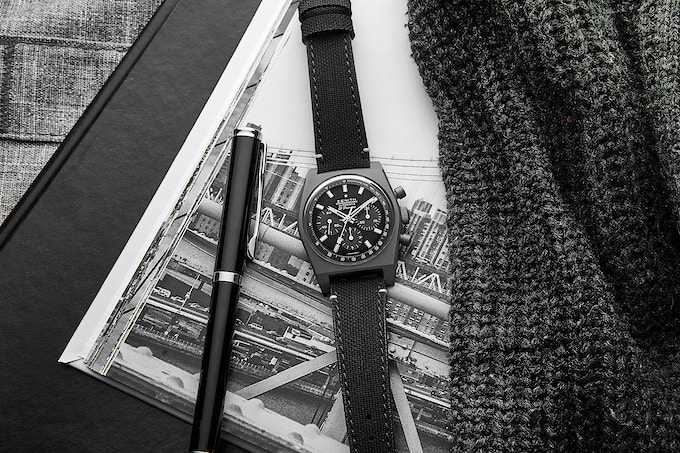 However, not all of the Revival models followed the same launch plan. Some, such as the HODINKEE Shop-exclusive G381 Revival are limited edition releases, while others were officially introduced into the brand’s production catalog. Without ever officially stating it, Zenith actually made the delineation between which models would only ever be created in limited runs, and which would be series-produced, quite clear. Those that paid tribute to the A386 – the best-known and most desirable El Primero execution – would be limited-edition releases, and Zenith even recently announced that it would be retiring the case once more. On the other hand, the new releases that used the angular A384 case profile would be placed in the spotlight for the first time in decades, with a choice of production models as well as a few exciting limited editions. 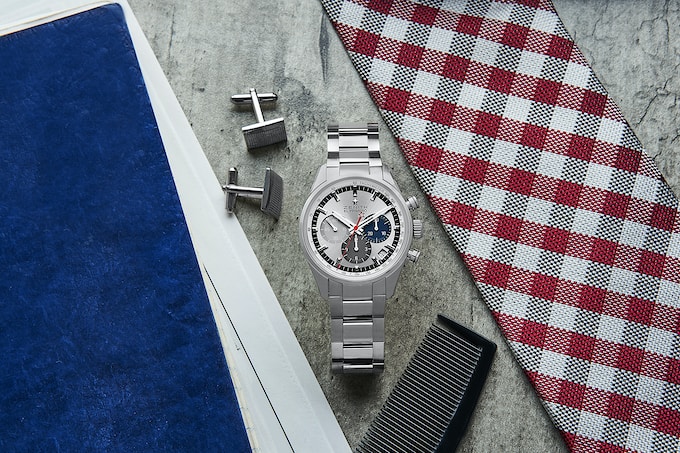 Although Zenith has become nearly synonymous with the high-beat, first-of-its-kind El Primero, and vintage examples of the popular A386 continue to rise in value, the company has a wealth of value to offer elsewhere. This includes collections like the Defy (which we recently profiled here), among other lesser-known El Primero variants. The A384 is the perfect example of exactly that; it not only brings out an underrated aspect of Zenith’s heritage that is pivotal to El Primero history, but it also functions as a platform for more experimental design.

Today in the HODINKEE Shop, we’re introducing two vastly different executions of the A384, as well as a pair of chronographs from the brand’s Chronomaster series that provide an alternative to the A386’s beloved aesthetic, without going overboard on the vintage inspiration. All four new watches add to the historic legacy of El Primero, one of the first automatic chronograph movements on the market, in different ways.

We won’t fault you if, at first glance, you thought the “Shadow” edition of the Chronomaster El Primero Revival was an entirely modern creation, after it was unveiled earlier this year. It sure looks the part, with its blacked-out micro-blasted titanium case, monochromatic aesthetic, and black-and-grey dial, but in fact, the new chronograph is actually a contemporary reimagining of a little-known Zenith prototype from the 1970s. 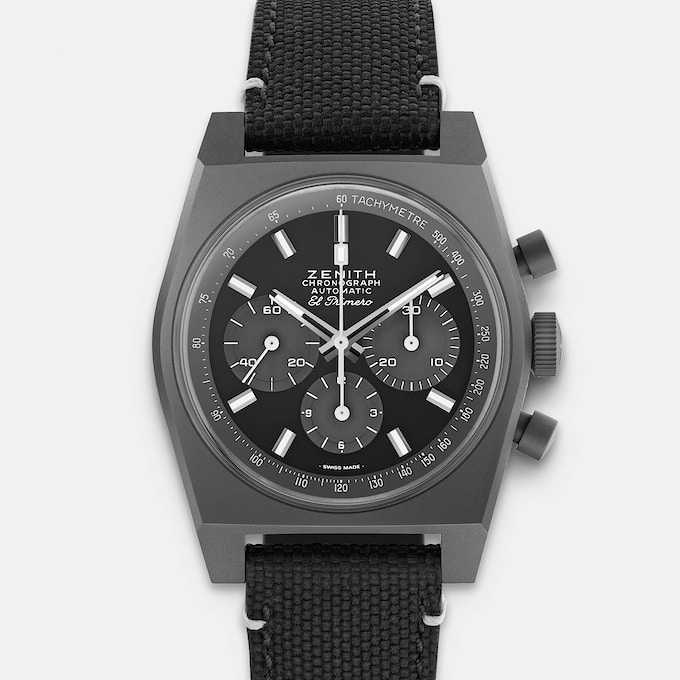 It’s been reported that less than five examples of the original steel black-PVD, manually wound chronograph (interestingly, the 1970s watch did not house an El Primero despite the movement being in production at the time) were built in total. A few years ago, in April 2017, we listed one of the few examples for sale in the HODINKEE Shop’s vintage section (view that watch here), so we were quite familiar with the source of inspiration and excited to learn that Zenith would be reinterpreting the watch in a brand-new way. 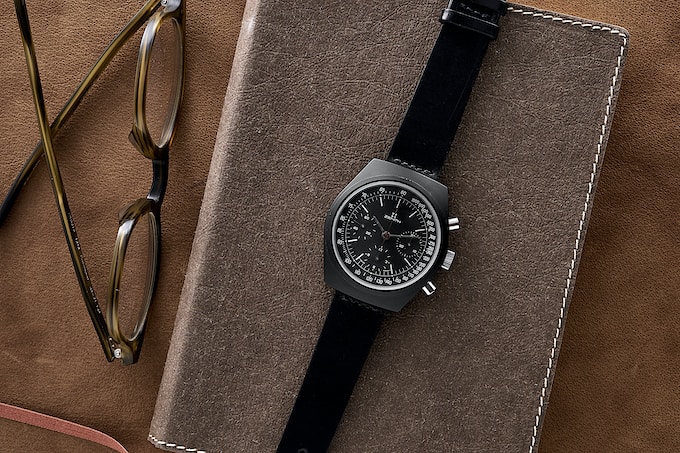 A 1970s Zenith prototype chronograph in PVD-coated steel that previously sold in the HODINKEE Shop and influenced the creation of the El Primero Chronomaster Revival ‘Shadow.’

The new Zenith Shadow shares an identical 37mm, angular case profile with the standard A384 Revival model, but that’s about all it has in common with its more conventional, vintage-inspired sibling.  The Shadow also stands out from the 1970s prototype in a few significant ways. Instead of black PVD-coated steel, the Zenith Shadow has a micro-blasted titanium case that renders it a matte dark grey color. The case has, of course, adopted the A384 design, and an automatic El Primero ticks at 5Hz inside. It diverges from El Primero convention, however, through the absence of a date indication – that’s right, this is the rare El Primero chronograph without a date aperture at the 4:30 position. Additionally, on the dial-side, Zenith took a reductionist approach, removing all scales and timing markers save for a tachymeter on the dial’s raised outer flange, and applied hour markers that are rhodium-plated and filled with Super-LumiNova. 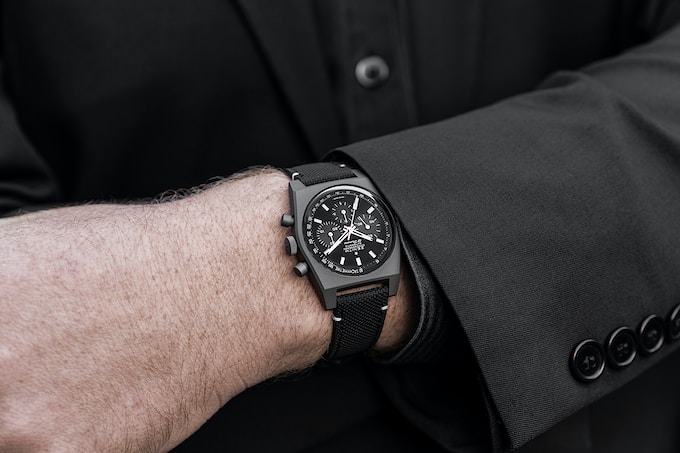 The Zenith Chronomaster El Primero Shadow is a different kind of “revival” watch for Zenith. It resurrects a chronograph that was ahead of its time and wasn’t even an El Primero, while offering a new way to approach and appreciate the movement’s lengthy history. It has significant visual presence with its blacked-out aesthetic, yet still flies under-the-radar due to the use of lightweight titanium and its compact 37mm diameter that sits tight on the wrist.

While the Chronomaster Revival Shadow takes deliberate liberties with its vintage inspiration, the recently unveiled Zenith El Primero A384 Revival on a new (or old?) ladder bracelet leans even further into it, with an execution that is virtually identical to its 1969 predecessor. 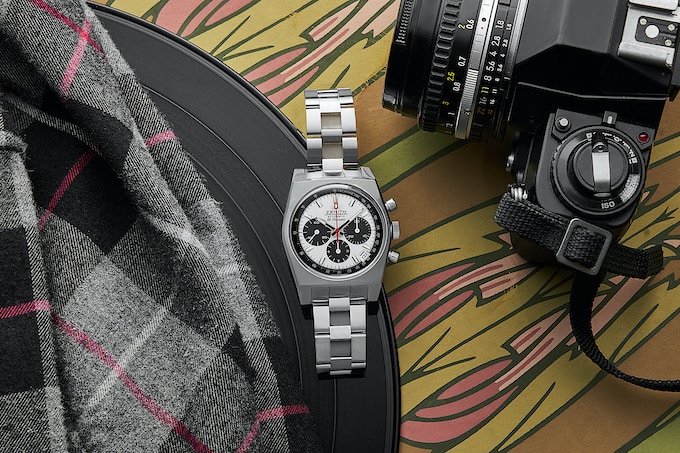 When we last visited this watch, it was only available on a black alligator strap, and we mentioned at the time that it was “designed without compromise,” which is true – for the most part. One detail missing from the initial release last year was the ladder bracelet found on the original 1969 watch. That’s been corrected here, as Zenith went to great lengths to recreate the unconventional bracelet found on the A384 (and A386) that was designed by Gay Frères.

Gay Frères is likely the most well-known producer of bracelets in all of watch history, supplying brands such as Rolex (which eventually acquired the company in the late 1990s), Audemars Piguet, Heuer, and Patek Philippe with metal bands to pair with their timepieces. Of the countless bracelets Gay Frères produced over its many decades as an independent firm, the ladder bracelet is one of the best known, primarily due to its close association with the Zenith El Primero. (For a more detailed look at the history of Gay Frères, click here.) 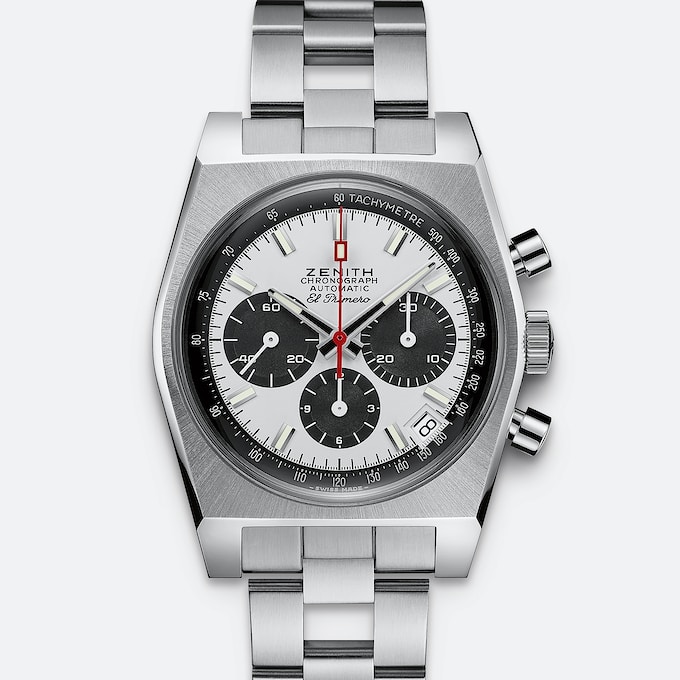 Unlike a conventional solid three-link bracelet, a ladder bracelet removes the central link in an alternating fashion – forming an appearance similar to a ladder – to offer a more breathable and flexible wearing experience and a one-of-a-kind look. Even when the original Zenith El Primero models were equipped with this style of bracelet, it was unlike any other band on the market. Much like the watch it’s connected to, everything has been reborn in exacting detail, from the finishing on the links to the clasp of the bracelet. 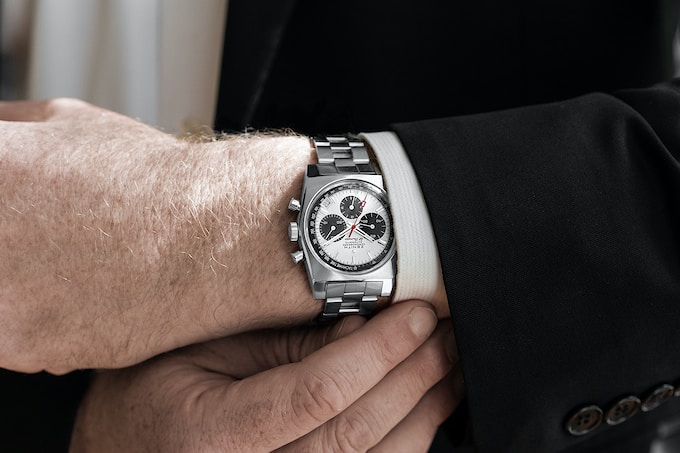 There are very few brands today, if any, that can reproduce, with practically identical components, a watch that is over five decades old – and Zenith is one of them. The case of the A384 Revival is an exact replica of the original, complete with its beveled edges and brushed surfaces. Its dimensions are interchangeable to those of the 37mm original, down to the crown and piston pushers. The dial, with its panda design, red chronograph hand, tachymeter scale, and applied luminous hour markers, is just as Zenith designed it over 50 years ago.

And with the addition of the ladder bracelet, we think the Zenith A384 Revival looks better than ever. 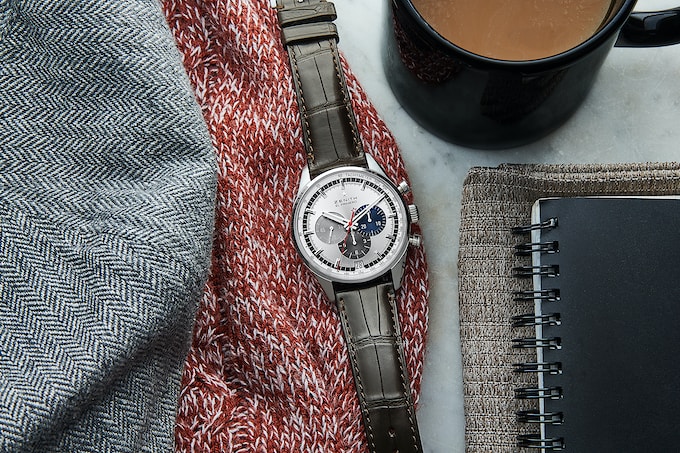 These are two of our favorite classic Chronomaster examples, and they expand our current El Primero selection with new options in a larger diameter and with a steel (non-ladder) bracelet. While not an exact “revival” of the original A386, these two Chronomasters provide a cleaned-up take on the design, sharing a familiar set of overlapping, tri-color sub-dials, but removing the anachronous base-100 scale and swapping out the vintage Zenith branding for a more modern overall look. 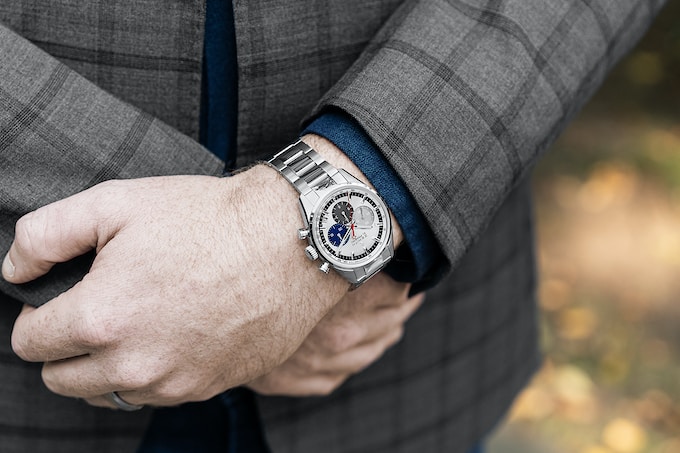 Although the conventional A386 case profile comes in at 38mm, Zenith adapted it to a more contemporary, larger size with a 42mm diameter a few years ago. The increased size expands the total dial real estate of the watch, moving the date window away from its traditional 4:30 position to six o’clock. If you’re after an El Primero and appreciate the functionality of a date window, but regret that it comes at the cost of dial symmetry, this Chronomaster is for you. The 42mm Chronomaster is available on an alligator leather strap, and it shares an identical price with its 38mm sibling, at $7,700. Learn more here.

While the A384 Revival with its new ladder bracelet has grabbed all the recent headlines for Zenith, it’s worth pointing out that, for years, the company has offered its 38mm Chronomaster with a contemporary, three-link oyster-style bracelet. Its brushed outer links and polished center links do an excellent job of matching up to the multiple finishes of the case. The Zenith Chronomaster 38mm on a steel bracelet is priced at $8,200, and it’s available right here.

Discover The Zenith El Primero In The HODINKEE Shop

Zenith’s automatic chronograph has been a horological touchstone for watch lovers for over five decades. It set a new standard for chronograph production when it debuted in 1969, and Zenith continues to be one of the companies that is most closely associated with the category. To top it off, El Primero-equipped watches are among the few options for enthusiasts with a sub-$10,000 budget that are interested in in-house automatic chronographs with cases under 40mm (in most instances).

There’s a reason why El Primero chronographs are collector favorites. You have groundbreaking innovation, decades of history, easy wearability, and impressive value – all in one collection, all right here.

In-Depth: A 500-Year History Of How To Set The Watch