Originally published by Jack Forster on HODINKEE, May 17th 2017

The 1950s were a watershed decade for dive watches, if you’ll forgive the pun. Within a few years of each other, three different companies released three of the most enduring classics of the modern dive watch idiom: the Rolex Submariner, the Blancpain Fifty Fathoms, and the Omega Seamaster 300. All had certain essential features in common – excellent visibility, rotating timing bezels, good water resistance – and each has gone on to become an icon for the company that made it. In 1957, another classic of the era debuted: the Breitling Superocean, which was released in both chronograph and non-chronograph versions. 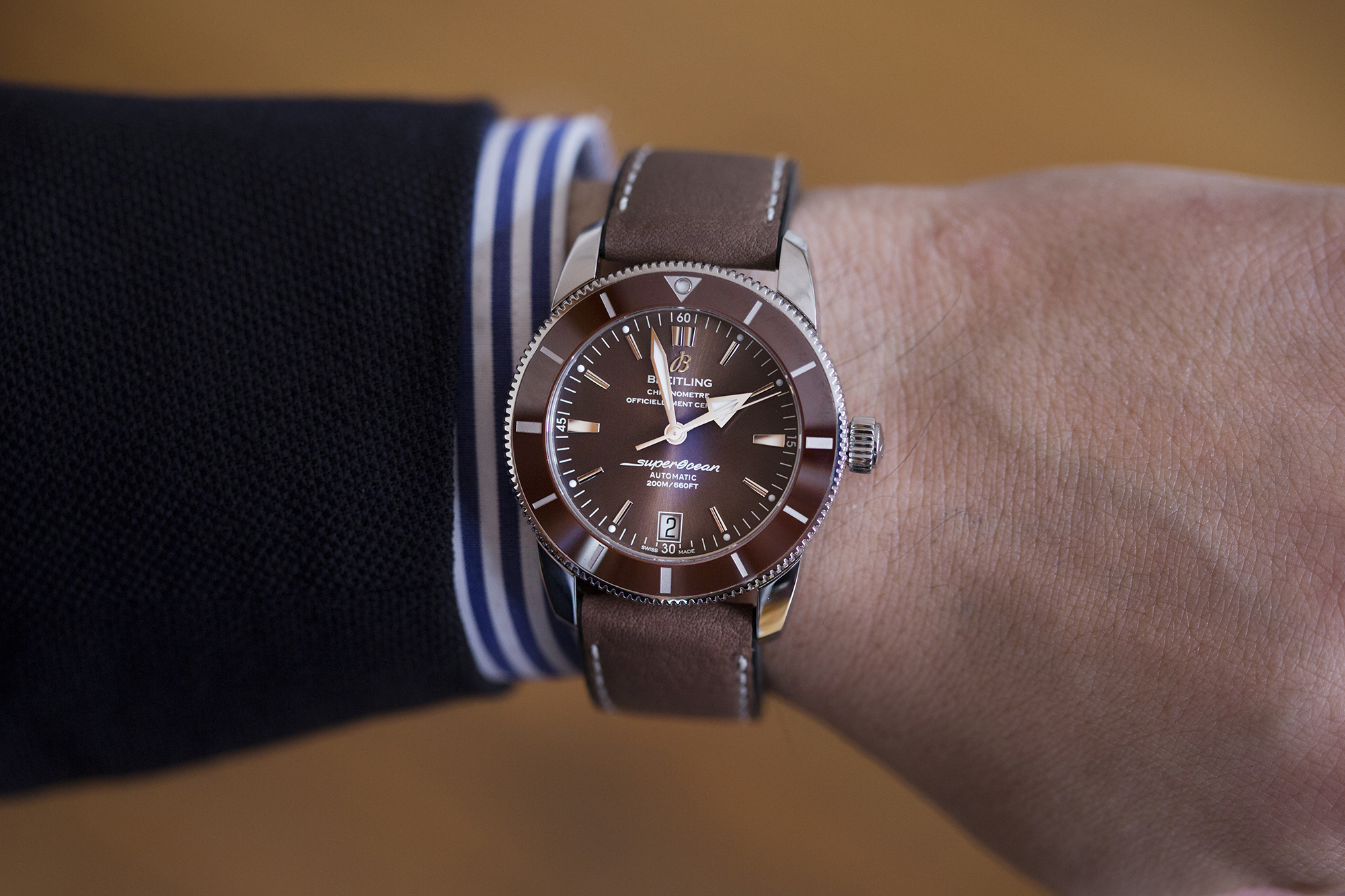 The Breitling Superocean Héritage II has a design strongly influenced by the original model from 1957.

Early Breitling Superocean watches have gone on to become very collectible – the first two references, in good condition, are now high five-figure timepieces (nothing like the crazy money being spent on rare Submariners, but still very respectable). This year is the 60th anniversary of the Superocean, and to mark the occasion Breitling has released a new version of the watch which looks back to the originals for its design cues, while at the same time looking very much forward from a technical standpoint – including the movement, which is being supplied to Breitling by Tudor (with modifications).

There are two sizes available for the new model – 42mm and 46mm, with a 46mm chronograph available as well – and all three models are available in brown, blue, or black. We had the blue and brown models in the office and the brown model on a strap was the one I wore for a week. The blue version on a steel mesh bracelet is just as handsome as the brown model, and for the same reasons: clarity of design and great depth of color. I can only assume the black model would be just as handsome, although the rich colors of the dials and bezels for the blue and brown models is hard to pass up, if you’re going to go for color in a dive watch at all. (Officially, the colors are “copperhead bronze” and “gun blue,” per Breitling). 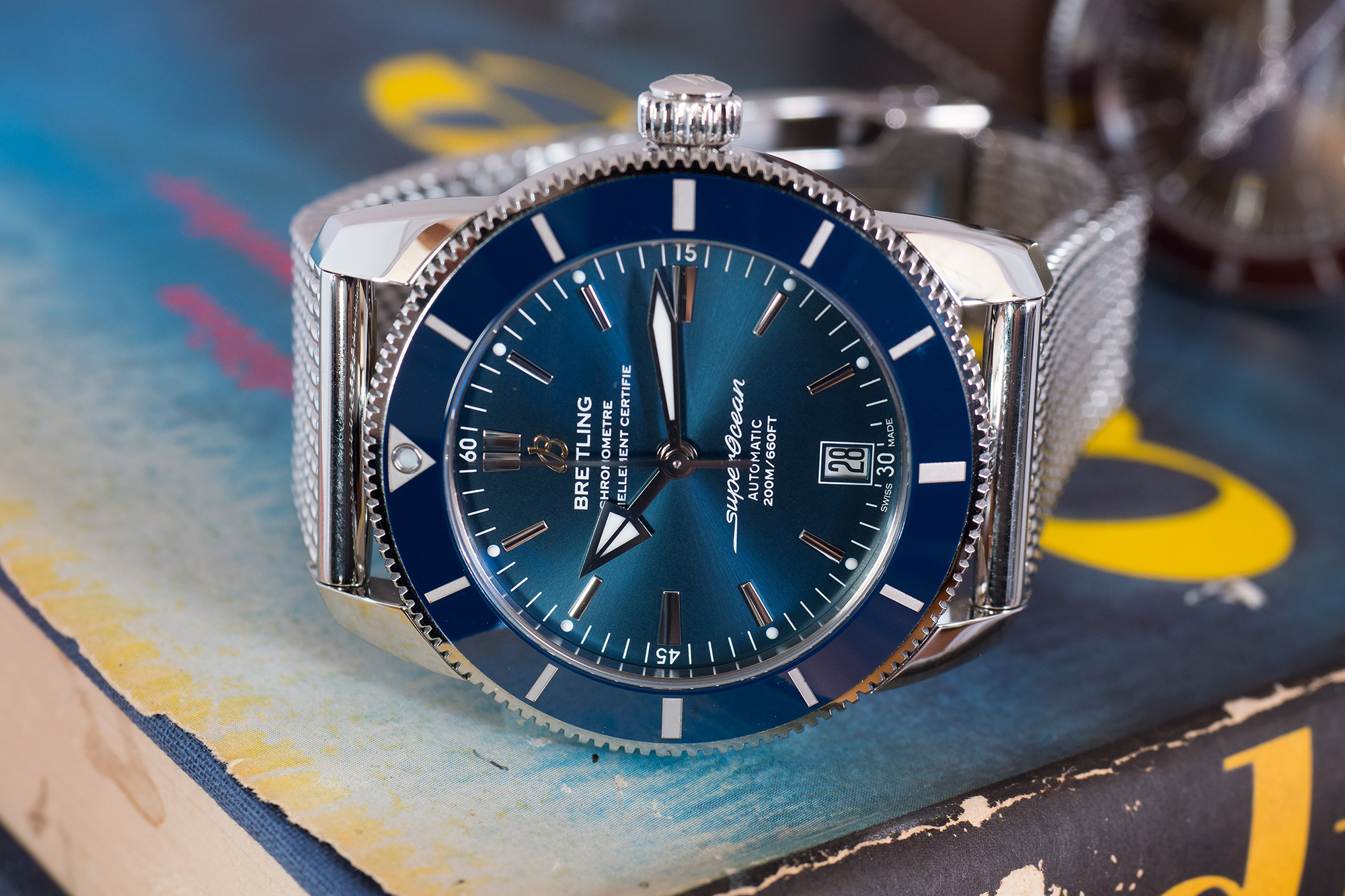 The strap on the brown version is rubber-lined leather and it’s quite thick, giving every impression of being nearly as durable as the steel mesh bracelet. Ordinarily, I would prefer something a little less heavy, but as the 42mm Héritage Superocean watches are 14.35mm thick, the strap works well and actually harmonizes better with the overall feel of the watch than would a thinner strap (for comparison, the Tudor Black Bay is about 14.8mm thick). 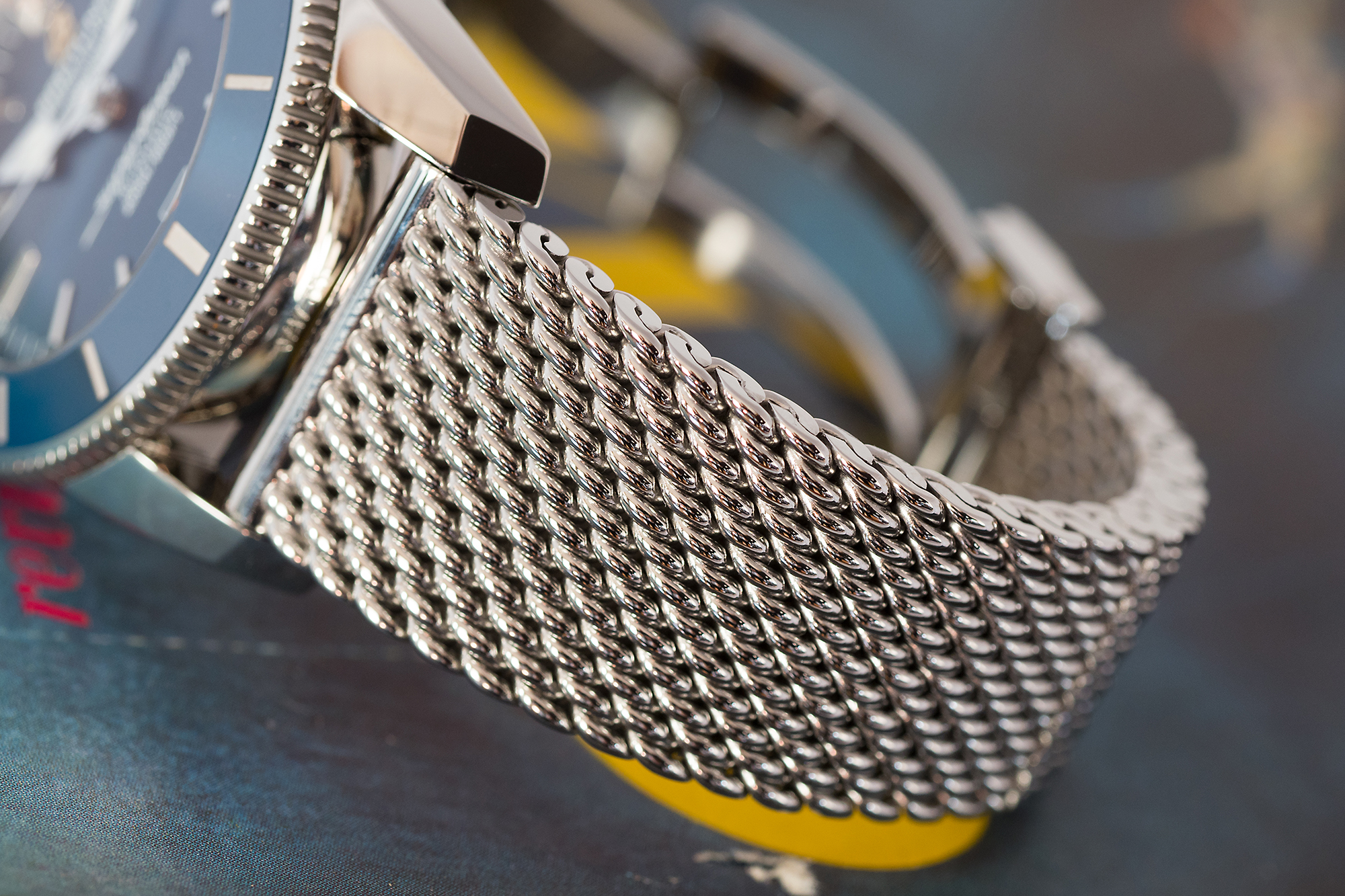 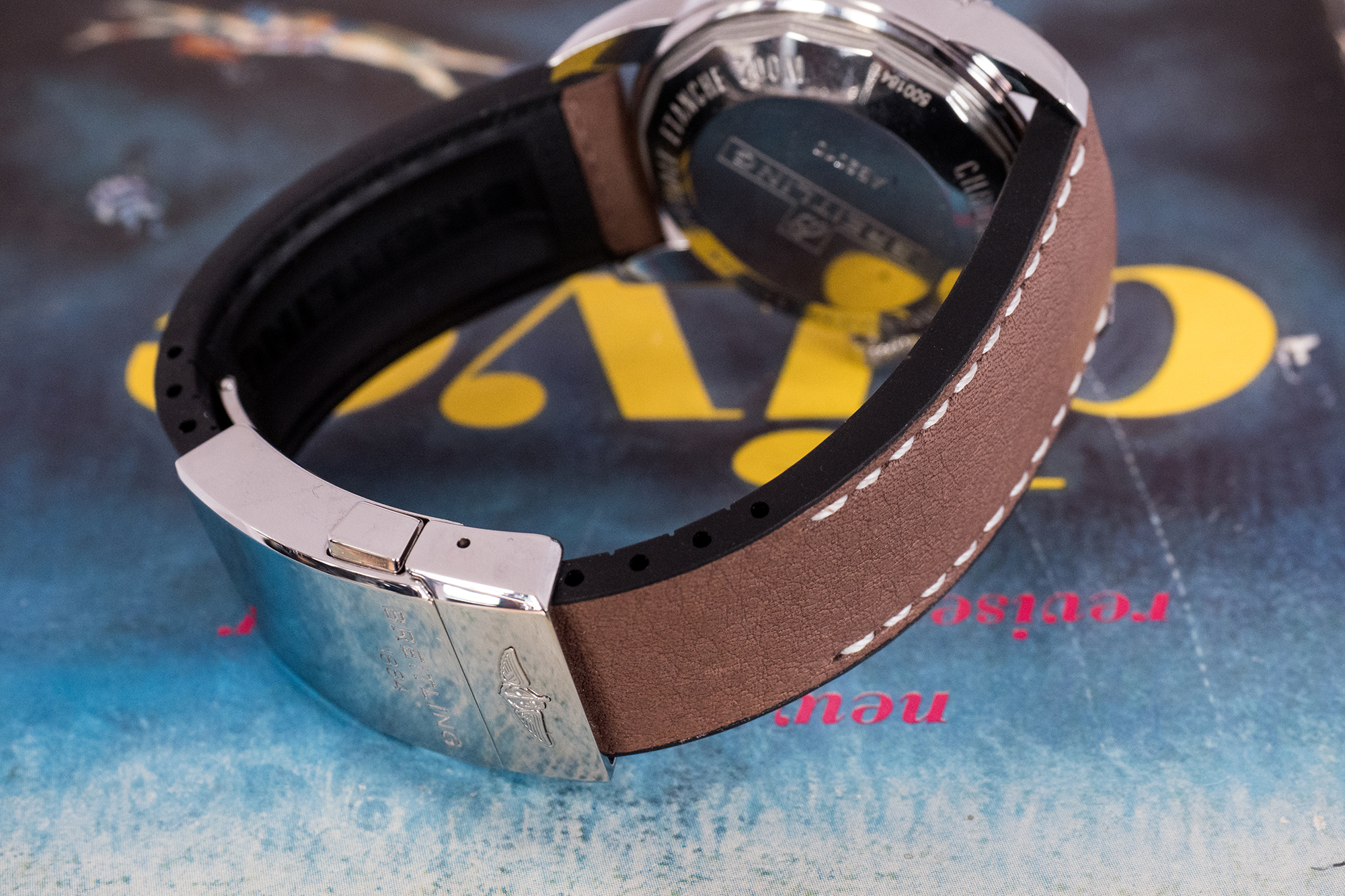 The buckle has a micro-adjustment feature, which lets you fine-tune the fit, although basic strap length is a little harder to adjust, as it requires cutting the strap to the approximate correct length first. The micro-adjustment mechanism is simple to use: Just push in to unlock it, and you can shift the point of attachment of the strap inside the buckle to suit. (Leaving nothing to chance, Breitling has helpfully labeled the relevant locking mechanism “push.”) 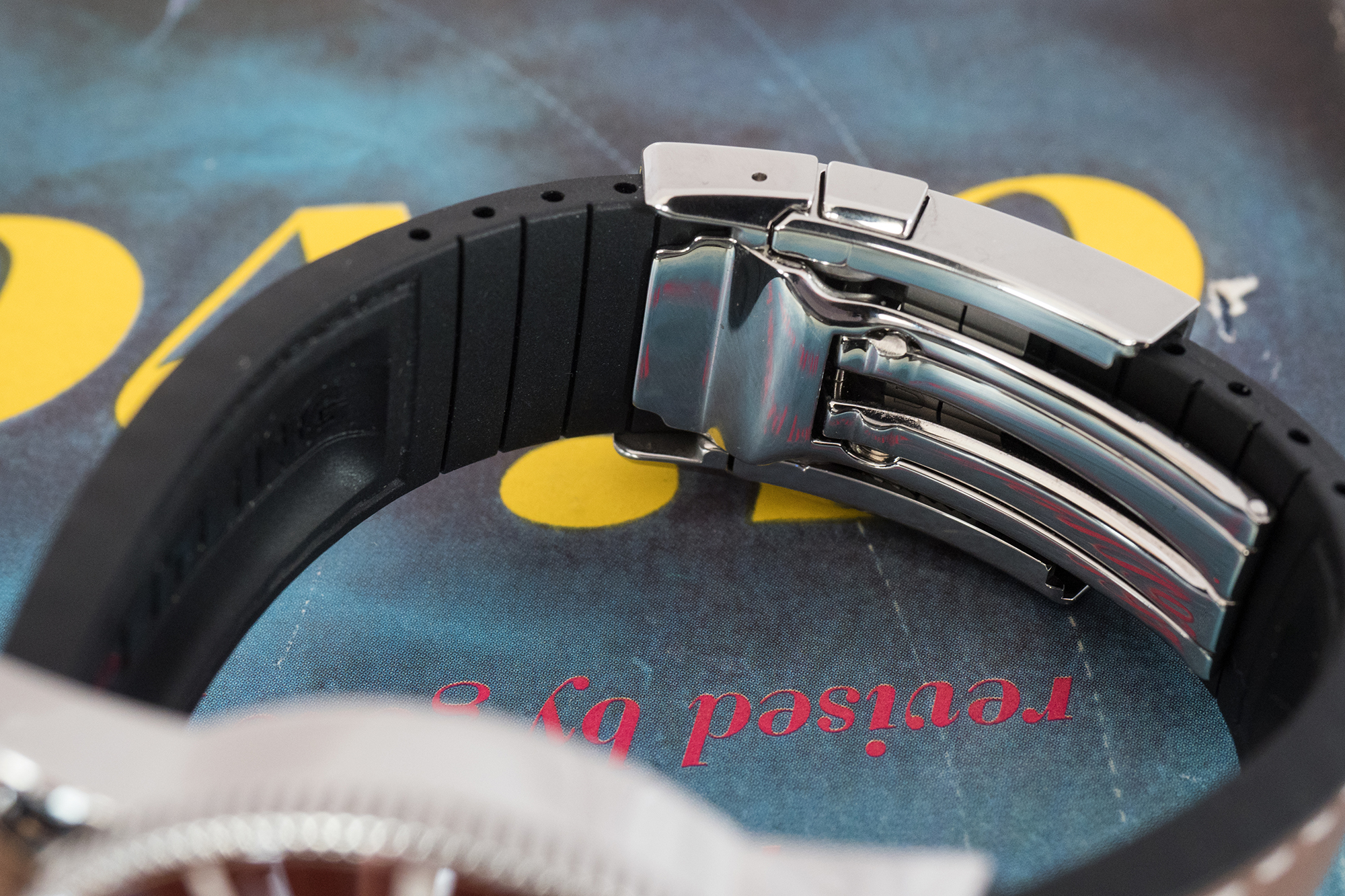 Both the heavy rubberized leather strap and folding clasp are very sturdy and well made.

Fit and finish on this sub-$5,000 watch is very good indeed. The hands and dial markers pick up light beautifully and the Superocean is, as it should be, instantly legible under pretty much any lighting conditions you’d care to throw at it (including total darkness). Aside from legibility, though, it struck me during the time I wore it as a genuinely beautiful watch, with a kind of elegance I’ve missed in some of Breitling’s more recent creations. The shapes of the hands and indexes, as well as the warm richness and saturation of the dial and bezel colors, goes to show you that making an aesthetically nuanced tool watch needn’t be an oxymoron (I still can’t quite believe I’m describing a Breitling as “aesthetically nuanced,” but there you have it). 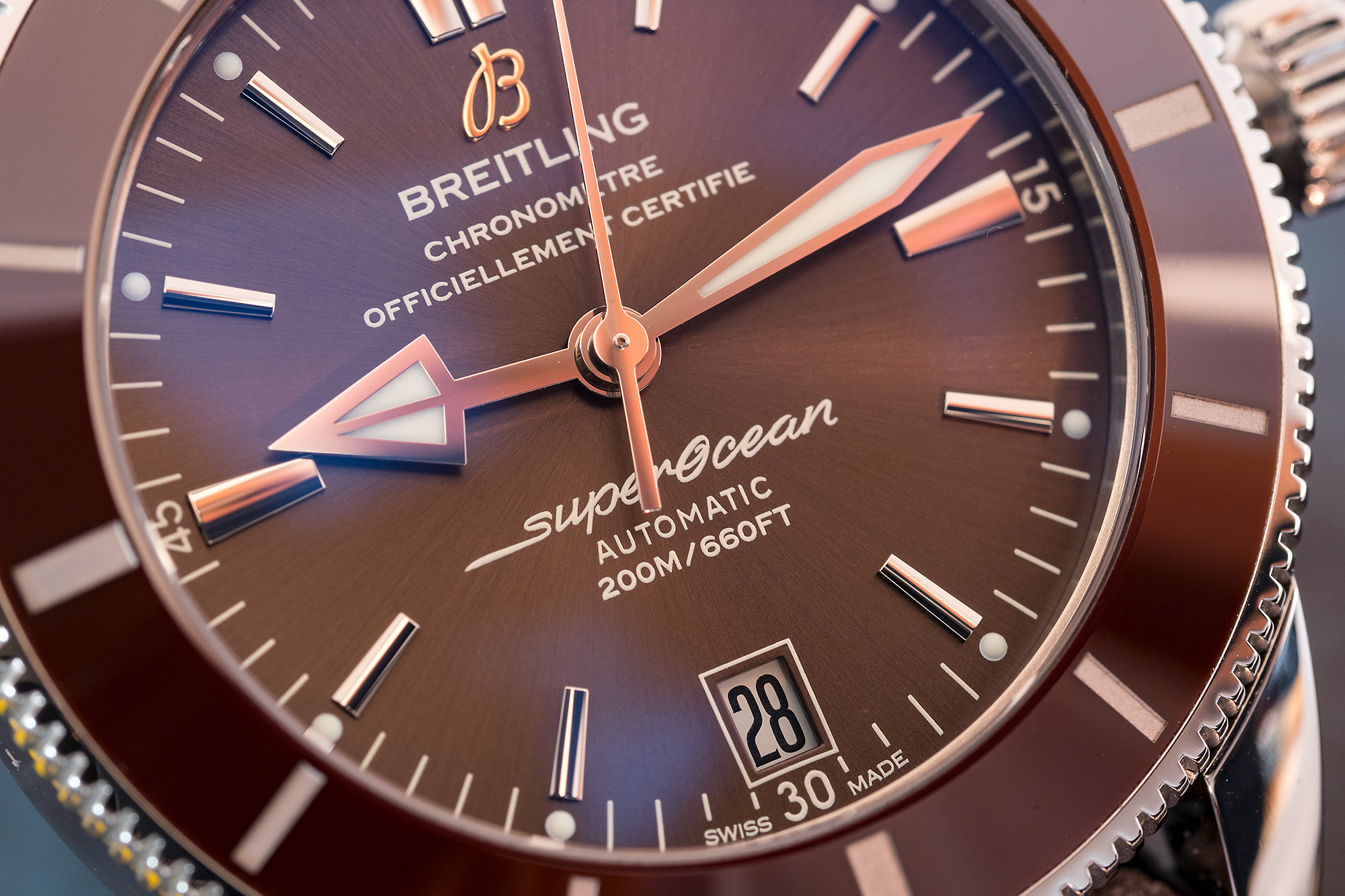 Placement of the date window at 6:00, and the general dial layout, offer a very balanced look.

The bezel feels slightly stiff, dropping into half-minute stops as you rotate it; the upside of a certain degree of resistance, of course, is that you feel when you set the bezel that it’s not going anywhere. 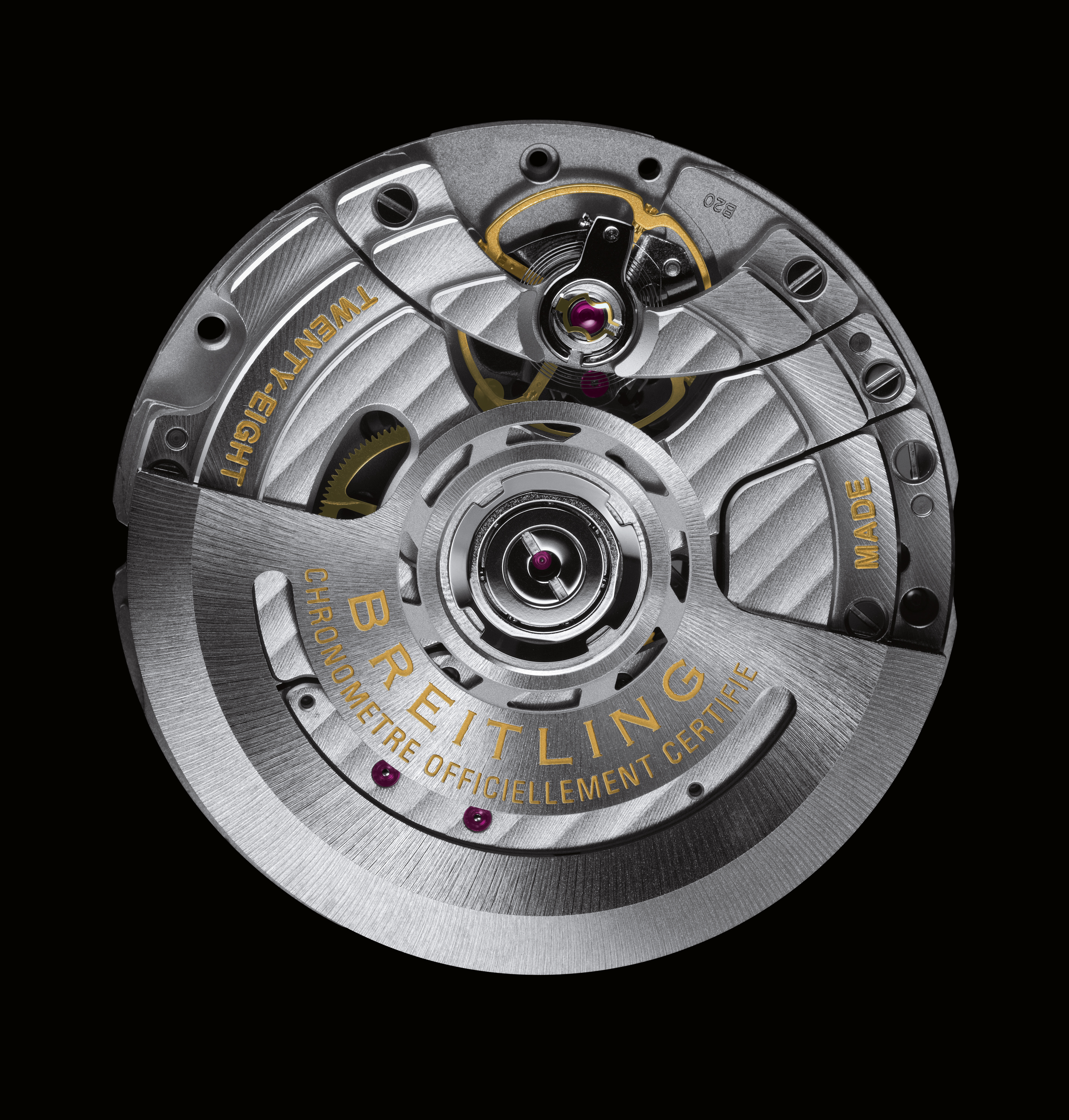 The Breitling caliber B20 is a modified version of Tudor’s caliber MT5612.

One of the most interesting aspects of the Superocean Héritage is what’s under the hood – in this case, the Breitling caliber B20. This is sort of an in-house movement, and sort of not; it’s based on the Tudor caliber MT5612, which was first introduced by Tudor in the Pelagos. There are some differences between the MT5612, as used by Tudor, and the B20 – for one thing, the B20 has somewhat more traditional finishing than MT5612, which has an almost modernist look, with bead-blasted bridges rather than the Geneva stripes used in the Breitling version. The other major difference is that the B20 doesn’t have a silicon balance spring, which means less resistance to magnetic fields. However, a lot of the value of the movement is still there. The B20 is, like the caliber MT5612, a tough movement designed for hard use, with a balance bridge (providing somewhat better protection against shock) and a freesprung, adjustable mass balance – and, of course, a 70 hour power reserve. 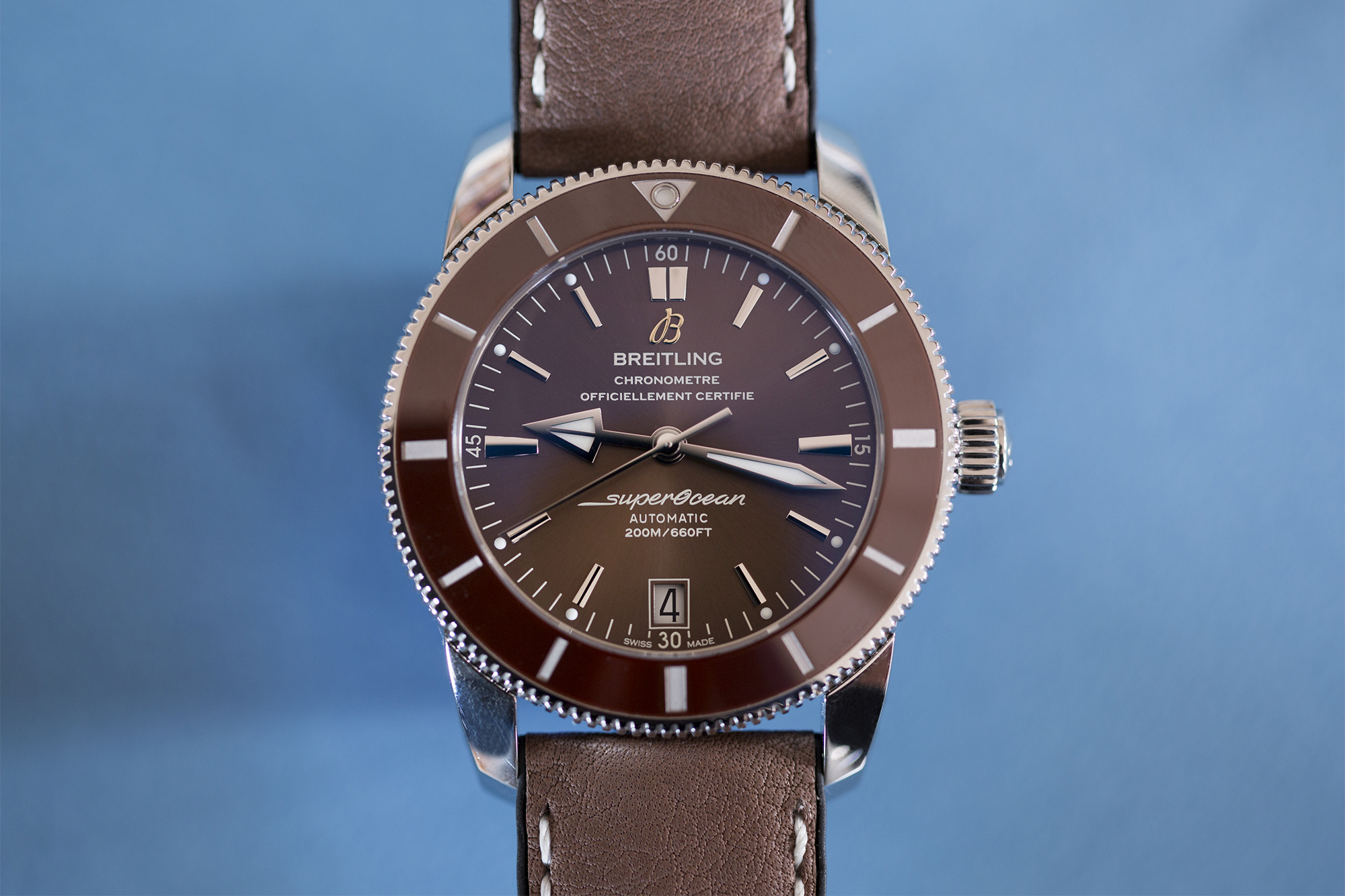 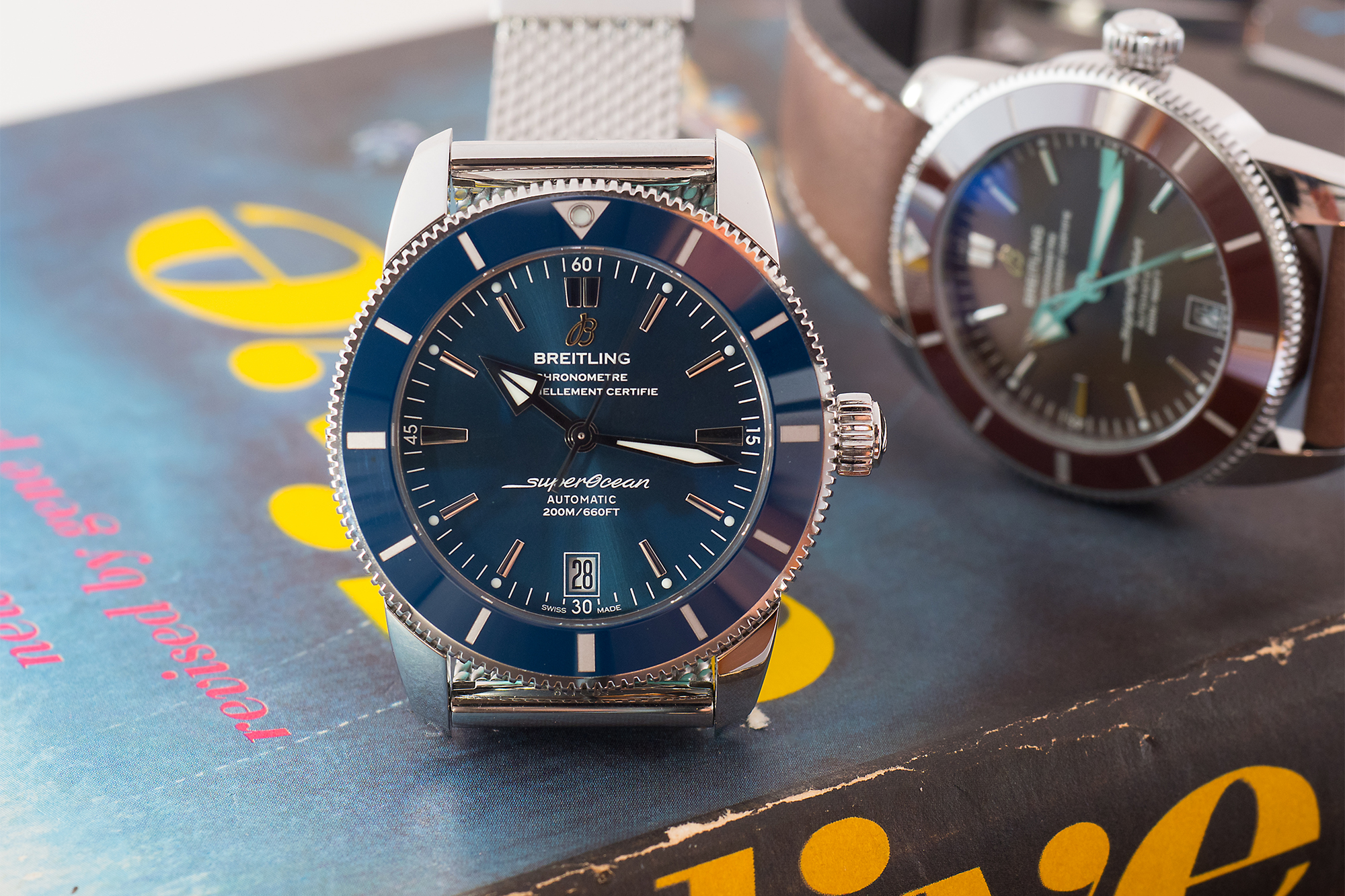 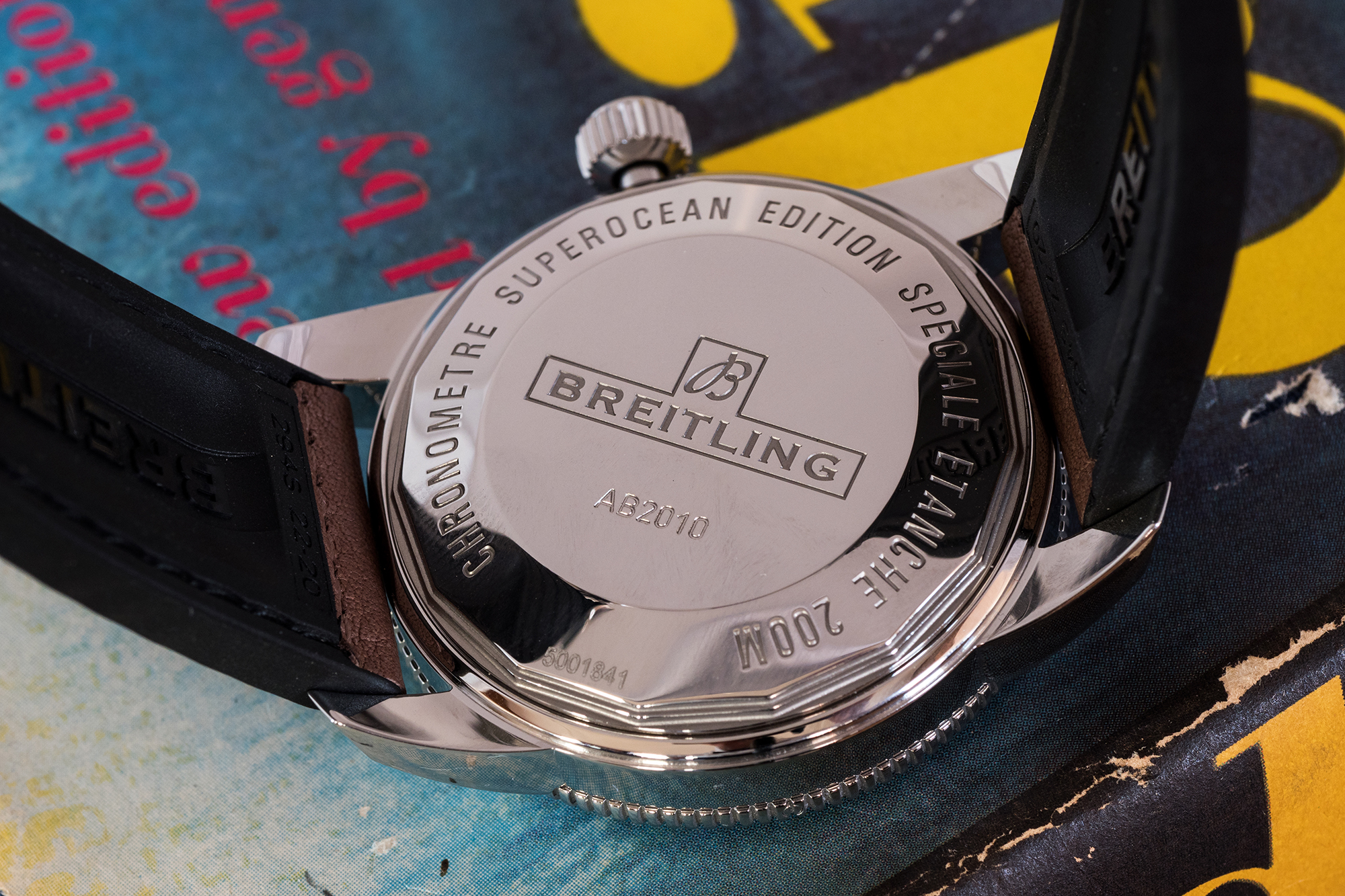 Because of the closed caseback, you can’t see the movement, which is a bit of a shame, but you can definitely tell it’s there from the performance of the watch. Certainly, this chronometer-certified caliber came through in daily use – I’d expect the watch to drift a little on its rate over time but at least during the one week period I wore it, it gained exactly one second per day, which is stellar performance by any standard. Wider use by Breitling of this movement (and I can only assume they’ll deploy it elsewhere in the next year or two) would make a significant change in how potential buyers evaluate the value proposition of Breitling watches. 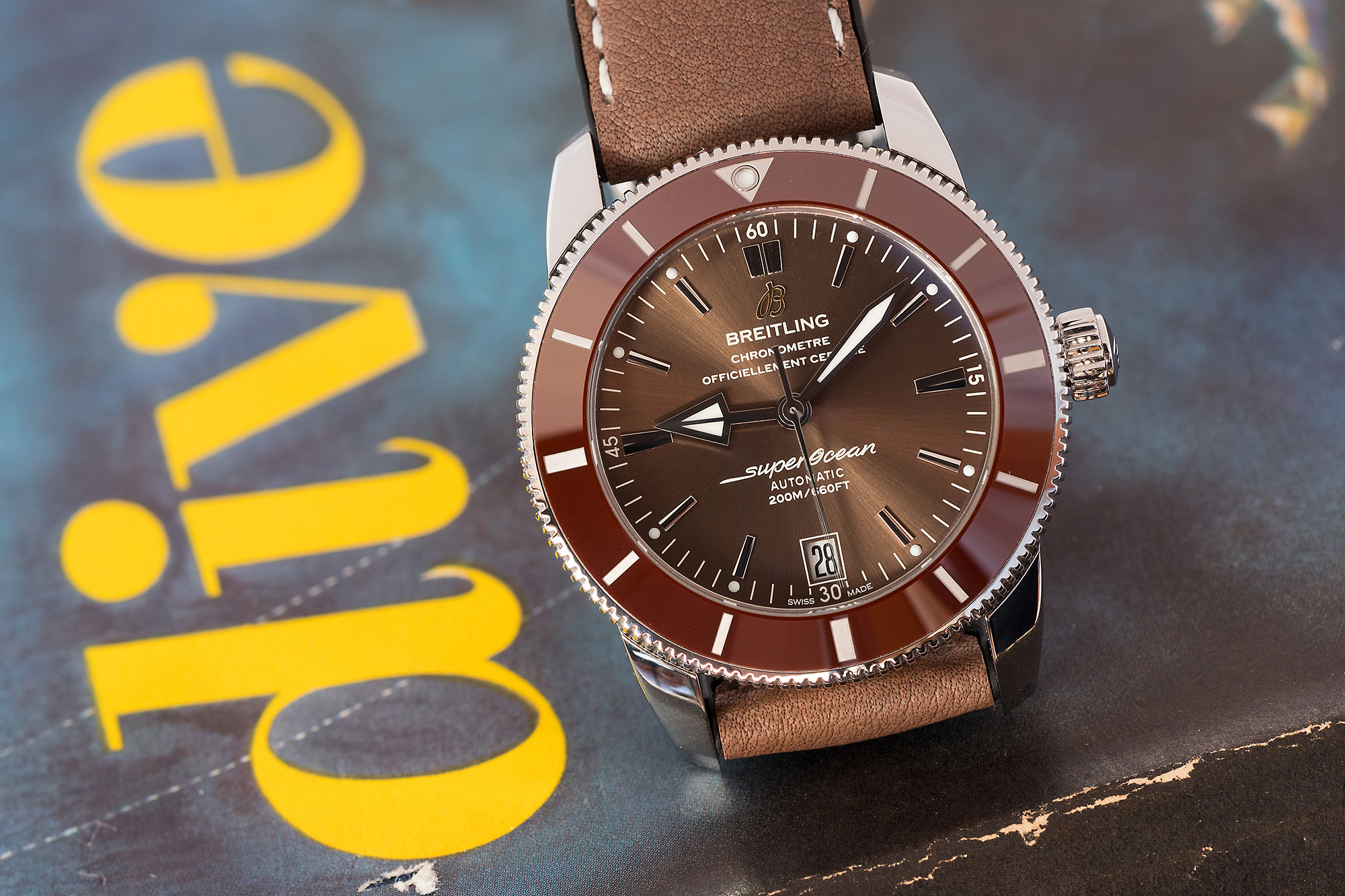 This version of the Breitling Superocean Héritage will run you $4,500 (the blue dial version on the mesh bracelet isn’t much more expensive, at $4,700). After a week with the brown dial version I really felt like there’s a lot on offer from Breitling with this one. The aesthetics are really compelling (it’s one of the more handsome new dive watches out this year, for sure). And with a ceramic bezel, a very nicely made strap with a well-engineered bracelet, and that caliber B20 inside – which gave nothing short of excellent performance during the week I had it, and which has some very nice technical bells and whistles going for it – Breitling has here a very serious new contender in the $5,000 and under dive watch category. Definitely worth a serious look, and a great deal of what you get in more expensive dive watches, for several thousand less.

In-Depth: Luminous Dials, What Makes Them Glow, And How To Spot Their Differences