Home runs and stainless steel timepieces abound in our watch-related movie of the week.

Brad Pitt makes his return to Watching Movies. We last saw him as the grizzled, over-the-hill, stuntman Cliff Booth in Quentin Tarantino’s Once Upon a Time in Hollywood. He won an Oscar for that one. This week, we find Brad Pitt as Billy Beane, the soft-spoken, tobacco spitting, Oakland A’s General Manager in Moneyball (2011). He should have won an Oscar for this one. Based on a true story, the  film takes place in 2002 and follows Beane and his assistant GM Peter Brand (played by Jonah Hill – another Watching Movies alum) as they turn Major League Baseball on its head, using analytics to build a competitive team on a budget. Both Pitt’s and Hill’s characters wear some pretty killer stainless steel sport watches in the process of evaluating players and making trades. 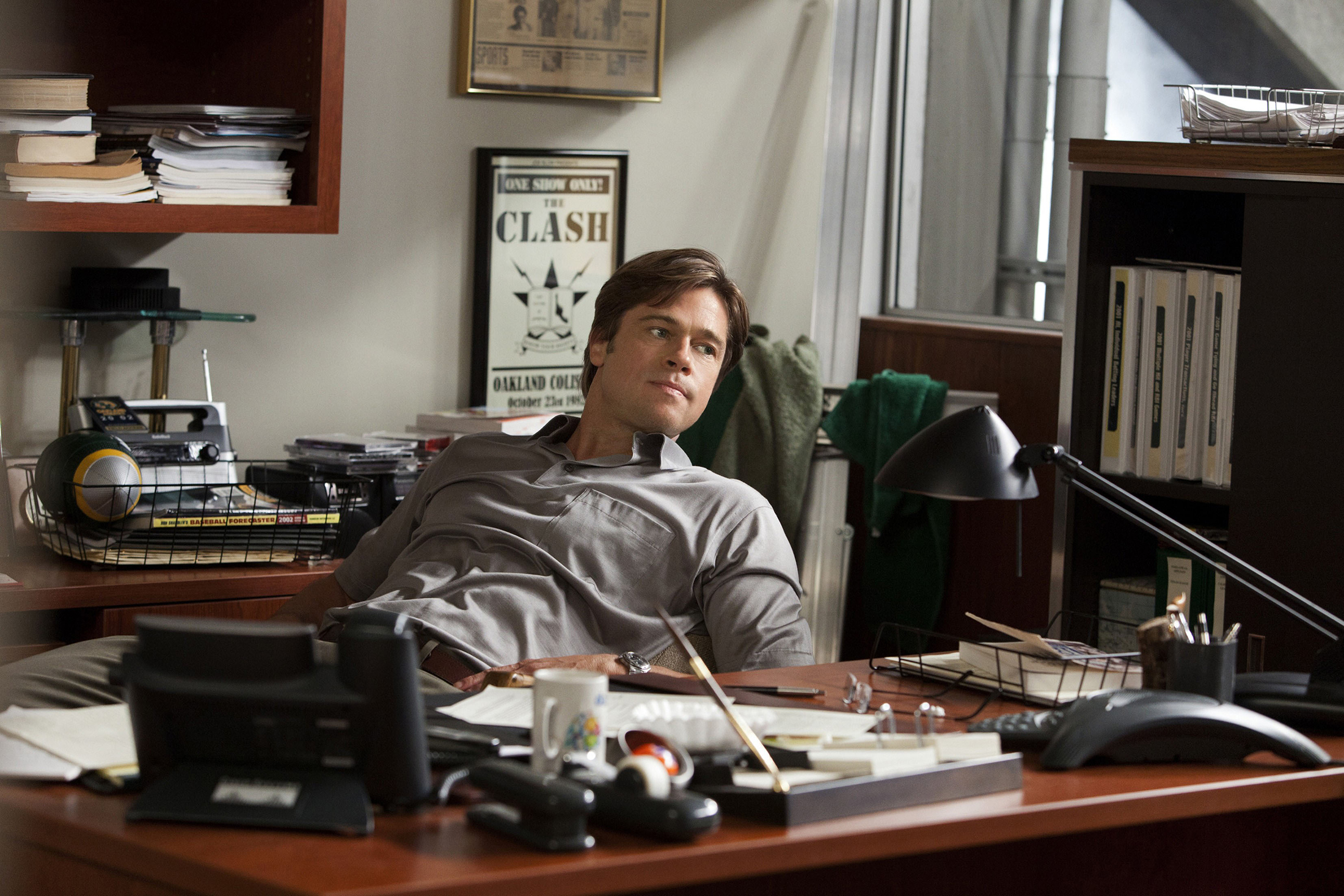 The MLB All-Star week festivities begin this weekend, culminating in the All-Star Game in Denver Colorado on Wednesday, July 14. There aren’t many baseball movies that throw the kind of heat that this one does in the timepiece department.

The plot of Moneyball is pretty straightforward. As the general manager of the A’s, it’s Beane’s responsibility to field a competitive team every season. That means drafting players, developing them in the minor leagues, signing free agents, etc. The issue in the big leagues however, is that some (ahem, the New York Yankees) have deeper pockets than others. This results in their ability to spend more money on players every season to stay competitive. Beane and his Oakland squad don’t have that luxury. In the film, Beane hires Brand to help him develop creative ways to field a contender, without shelling out the big bucks. Somehow, director Bennett Miller (of Capote fame) makes the tedious process supremely entertaining – though I suspect that has more to do with the Steven Zaillian/Aaron Sorkin-penned script. 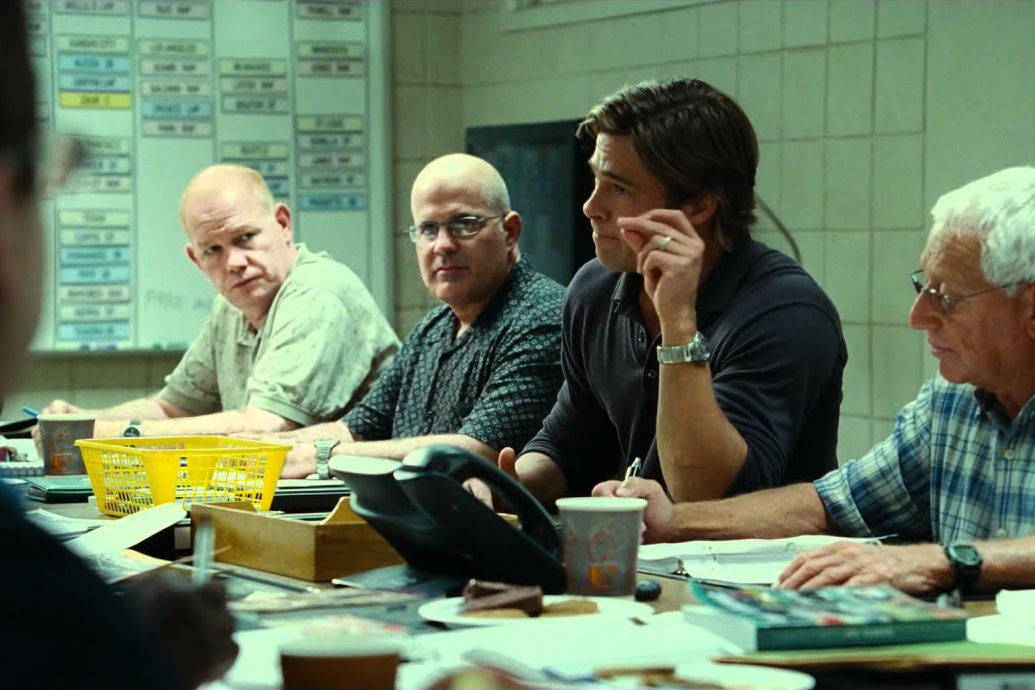 So this week’s movie  has a pretty good timepiece backstory. In fact, HODINKEE contributor and purveyor of the wildly popular, all things Heuer, On The Dash, Jeff Stein had a hand in the watch-sourcing process. According to his account of events, they were going to present Brad Pitt with two watches to choose from for the film. At the last minute, the prop master spotted a certain TAG Heuer Kirium on the wrist of a crew member and asked to borrow it to show Pitt. As fate would have it, this was the watch he chose, an under-the-radar TAG on a steel bracelet. Stein then went on to source what’s known in the industry as “doubles” for the watch, in case anything happened to the original. 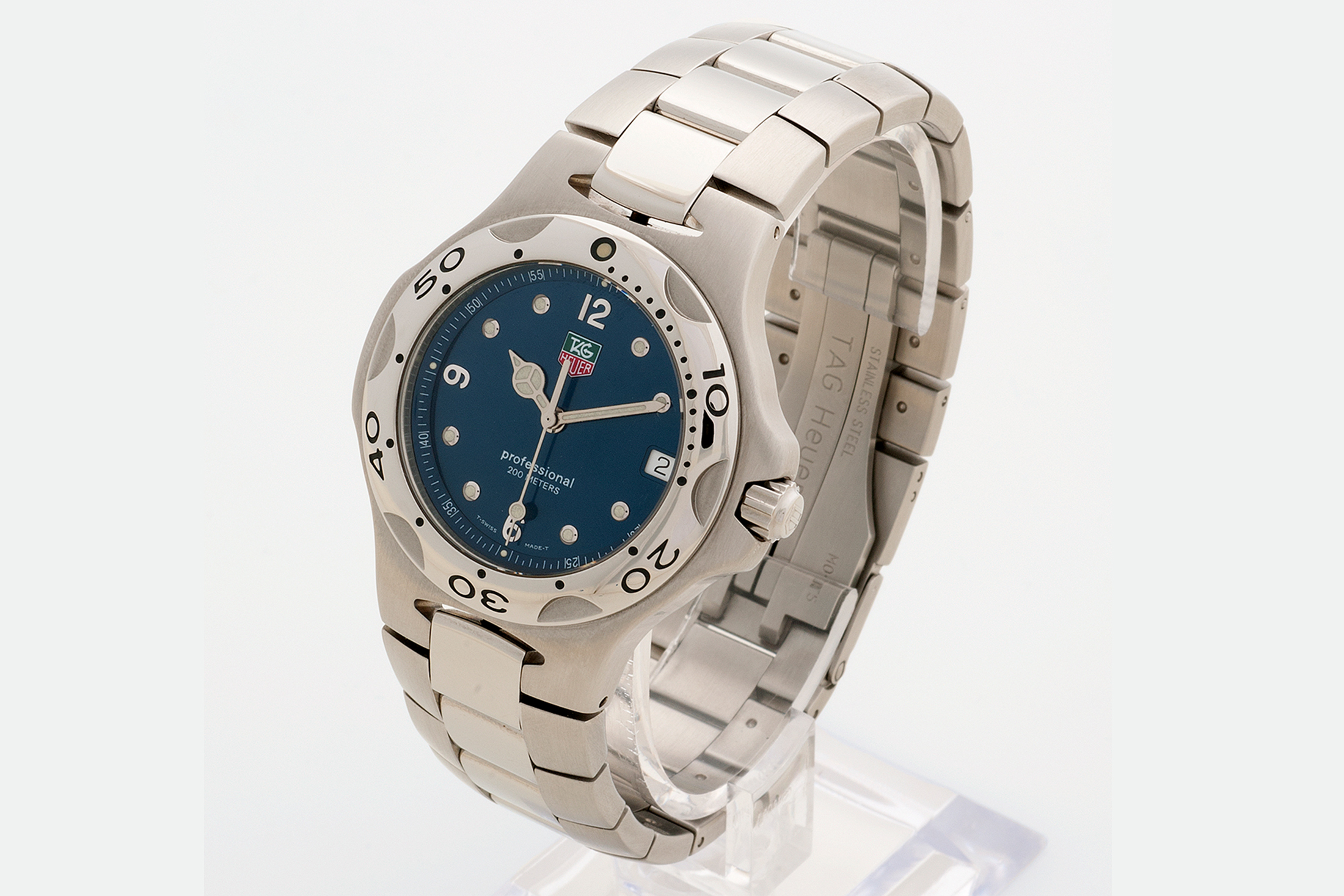 The watch really fits the Billy Beane character on-screen and can be seen basically throughout the movie. As Stein put it in a piece he wrote around the time of the film’s release, the Kirium “is ‘period correct,’ with the watch produced in the late 1990s being perfect for a story that focused on the 2002 baseball season.” 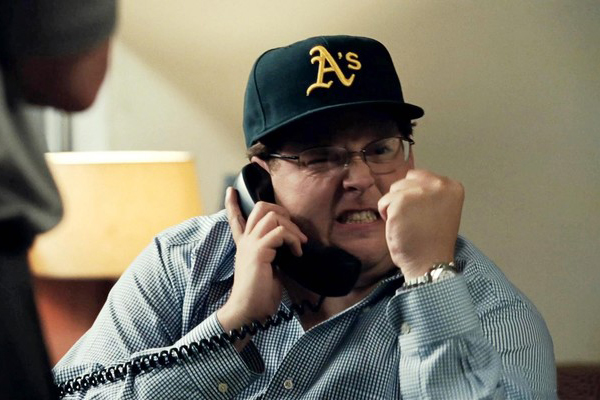 But of course, there’s also Hill’s Peter Brand, a Maryland native (like me!) and Yale graduate (not like me!) who somehow made his way to Assistant GM of a Major League baseball team as his second job … ever. His watch is a steel Rolex Daytona on bracelet with a white dial, likely the reference 116520, which predates the current ceramic bezel models. I like to think this was his Yale graduation gift. No matter, he wears it pretty unassumingly on wrist, often hiding it beneath all manner of sleeves. This is not only Hill’s second appearance on Watching Movies, but also his second time rocking a Daytona. In The Wolf Of Wall Street, his watch was a replica (sigh) and also solid gold. Here, he pulls off the steel variant with its polished center links very well. 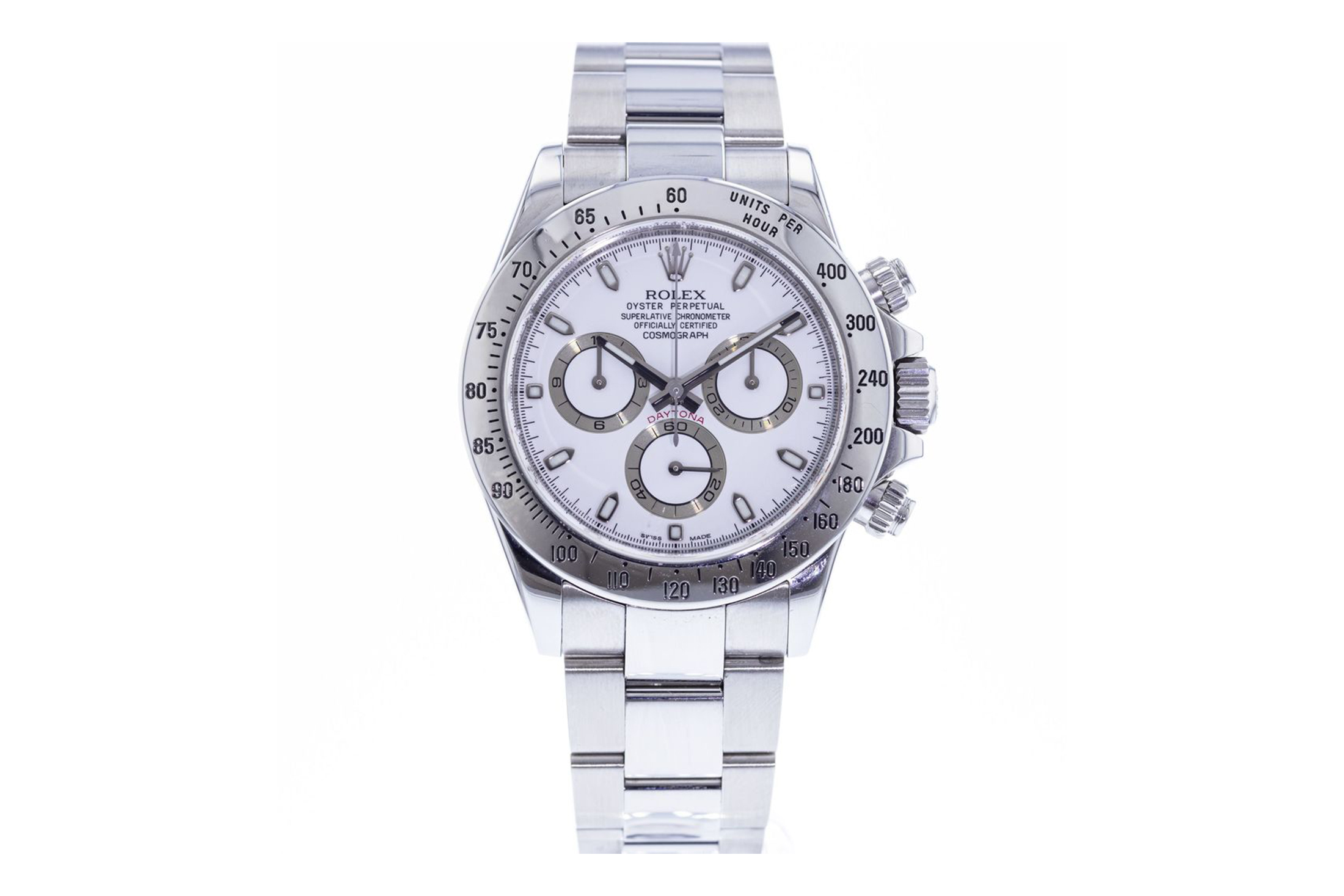 A Rolex Daytona 116520, similar to the watch worn by Jonah Hill’s Peter Brand in Moneyball.

But that doesn’t conclude the watch festivities in this movie – we’re headed into extra innings. As an added bonus, one of the scouts on Bean’s staff wears a black dial Rolex Explorer 16570. Let us know in the comments if you can spot it.

There’s a cool montage, early in the film, of Beane and Brand researching how best to assemble their analytics-forward, budget-friendly roster. Sounds of computer mouse clicks, and ambient music swell in the mix, as pages of player information and statistics flash on the screen. The film then makes a hard cut to Brand sitting at his computer [00:28:54] showing how unromantic, and un-montagey this process is in real life. As he operates the computer, staring blankly at the monitor, his arm rests on the desk of his dark windowless office, showing the white dial and shiny center links of this Rolex Cosmograph Daytona. End montage. 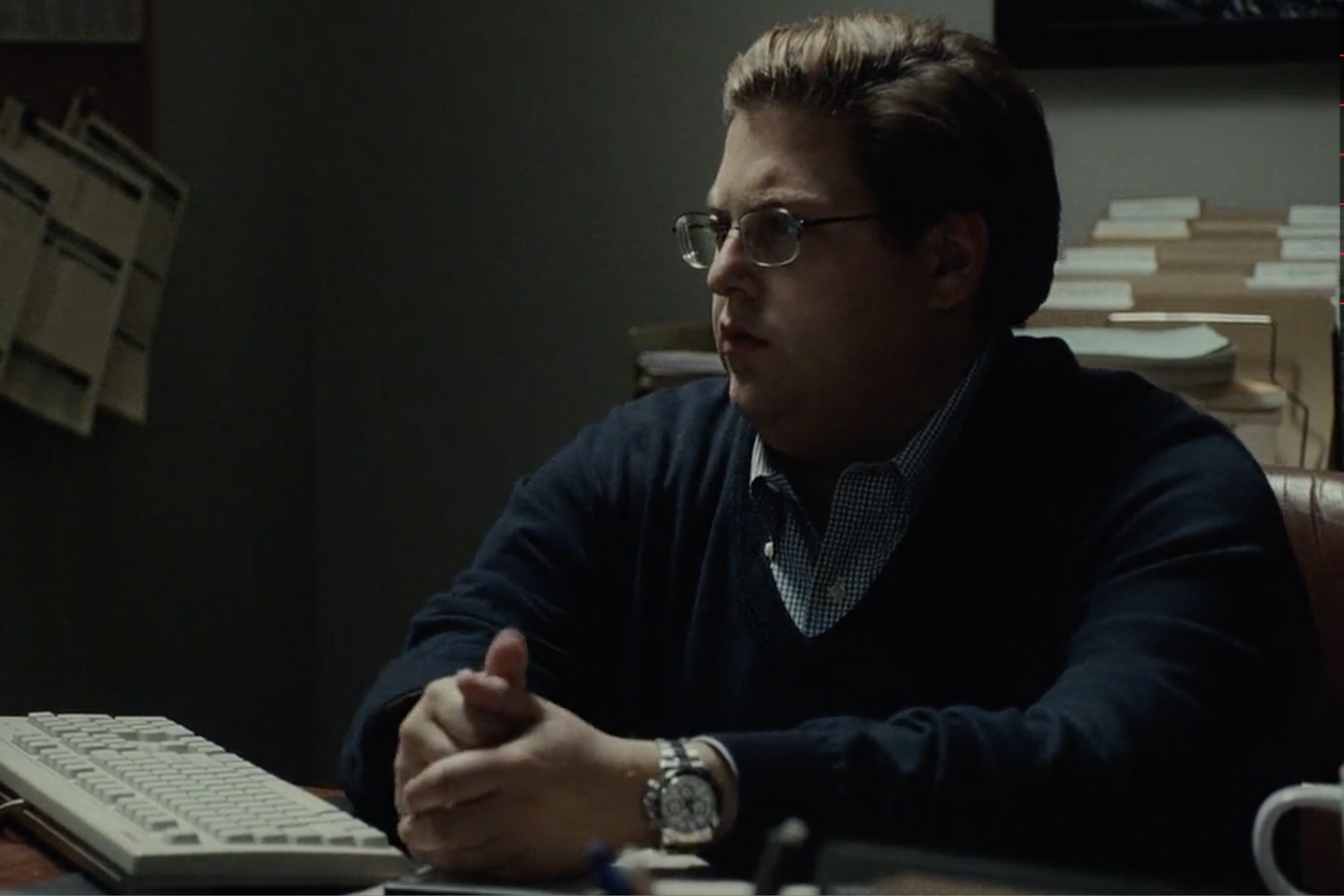 At the mid-way point of Moneyball, Beane and Brand share a moment in Beane’s office – which has windows, by the way. The first season with their newly constructed Oakland A’s roster is underway and Beane is asking Brand to go on the road with them [01:00:27]. He uses this conversation as a backdoor to teach a reluctant Brand how to cut players from the roster. As the two go back and forth in a pretty entertaining role play, Beane is sitting, his legs up on the desk, spitting his packed lip into a Dixie cup, while showing off his TAG Heuer Kirium-equipped wrist on the surface of his sunlit desk. 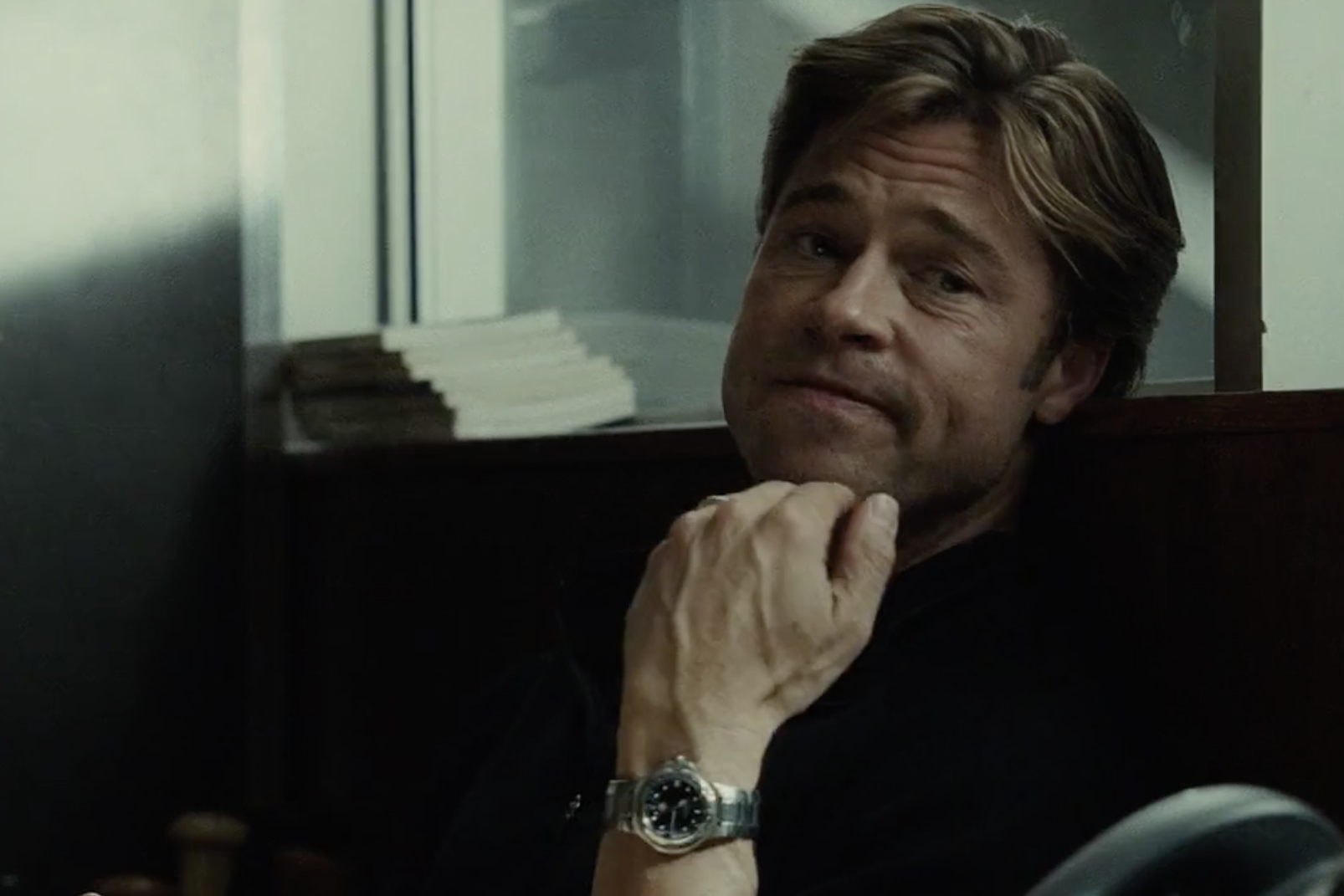 Moneyball (starring Brad Pitt, Jonah Hill, Robin Wright, and Phillip Seymour Hoffman) is directed by Bennett Miller, with props by Maureen Farley (with an assist by Jeff Stein), and script by Steven Zaillian and Aaron Sorkin, based on the book by Michael Lewis. It’s available to rent on iTunes or Amazon.