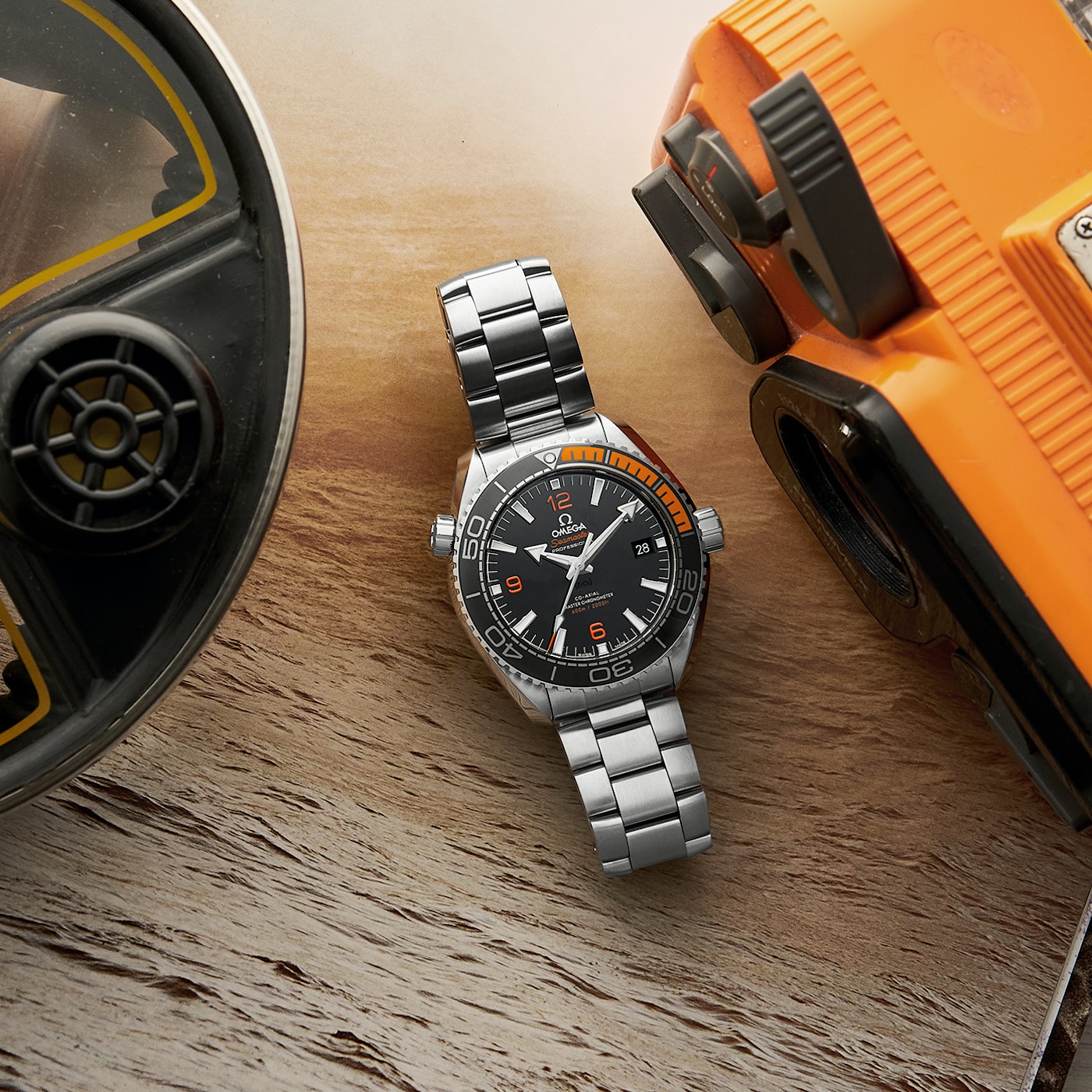 The Planet Ocean family of dive watches has existed since 2005, although it feels like a much more mature offering from OMEGA. It almost seems as if it has been a part of the brand’s core Seamaster collection for decades. The reason it may feel like such a tenured product, despite being born just 15 years ago, is due to the immediate success it received upon its release, making an indelible impact on OMEGA’s rich catalog of sports watches in the process. It’s impossible to imagine the Seamaster collection today without the Planet Ocean’s presence. 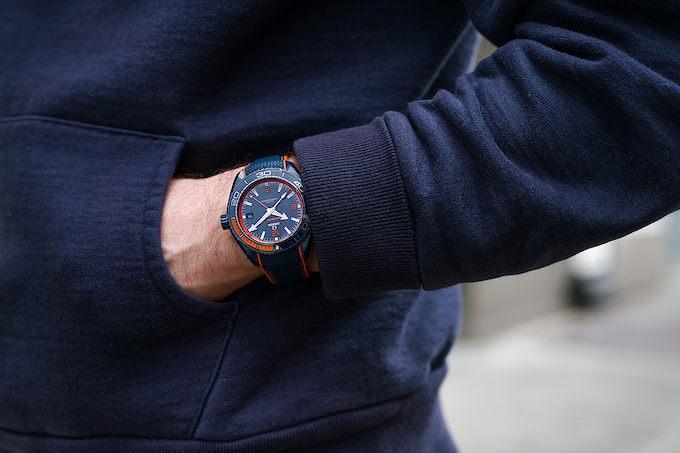 The contemporary Seamaster line-up is divided into a number of expansive families, but there are four primary sub-collections that stand out equally for their diversity and their popularity: the Seamaster Aqua Terra, the Seamaster 300, the Seamaster Diver 300M, and the Seamaster Planet Ocean. The Seamaster Aqua Terra, introduced in 2003, is only a few years older than the Planet Ocean, and it fulfills the original conceit of the Seamaster upon its inception in 1948 as a go-anywhere, do-anything watch with plenty of crossover appeal. The Seamaster Diver 300M, with its roots dating to 1993 and an uncontested level of renown thanks to its long-established presence on the wrist of a certain British superspy, deftly toes the line between being an ISO-certified dive watch and a casual daily wear companion (as Cole discovered in his recent A Week On The Wrist). Finally, the Seamaster 300 is OMEGA’s vintage-inspired diver, taking direct cues from the design elements of the inaugural Seamaster dive watch from 1957.

But the Planet Ocean is an entirely different beast. It dives deeper (up to 600 meters), it wears harder (and bigger), and it is more colorful (with ample usage of blue and orange) than any of the other core members of the overall Seamaster collection. 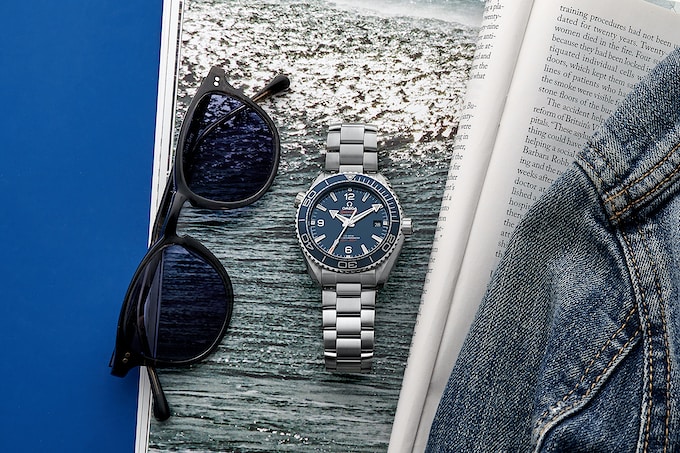 Which is why it’s fair to consider the Planet Ocean as the most serious and performance-oriented Seamaster dive watch, positioned as the more professional option compared to its siblings. After all, when OMEGA began working with adventurer Victor Vescovo on what would become “The Deepest Diving Watch Ever,” what watch was strapped to the outside of Vescovo’s submersible as it reached a record-breaking depth of 10,928 meters below the surface? A specially designed version of the Planet Ocean. And out of all the OMEGA references available to him, what watch is brand ambassador and former Olympic swimmer Michael Phelps best known for wearing? A Planet Ocean Chronograph, of course. 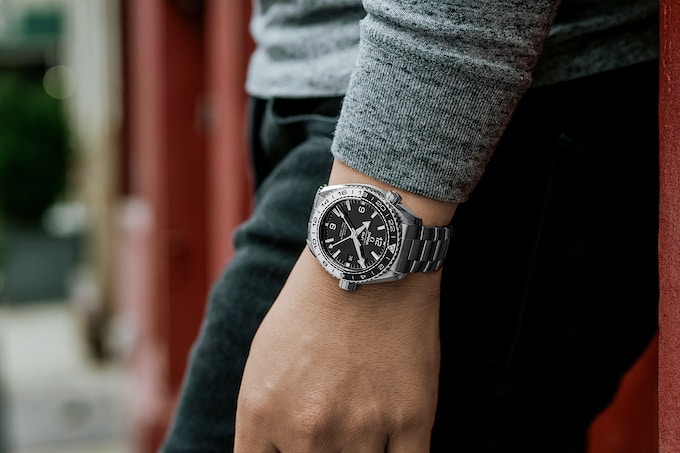 The Planet Ocean is OMEGA’s definitive dive watch, a consummate representative of one of watchmaking’s most popular genres. It’s also the latest addition to our growing collection of OMEGA timepieces. Seven different Planet Ocean models are newly available in the HODINKEE Shop, with each one standing out in its own way, through a variety of sizes, colors, case metals, and complications. Read on for a quick look at the new watches, or for a deep dive on each of the Planet Oceans we have in stock, click here.

The Planet Ocean is currently in what could be considered its third generation, and despite its substantial growth in both the number of references and complications available, the standard-bearer of the line is still the three-handed dive watch. The collection’s latest refresh came in 2016, with the introduction of more premium materials, new design elements, and, most importantly, the usage of Master Chronometer-certified movements. 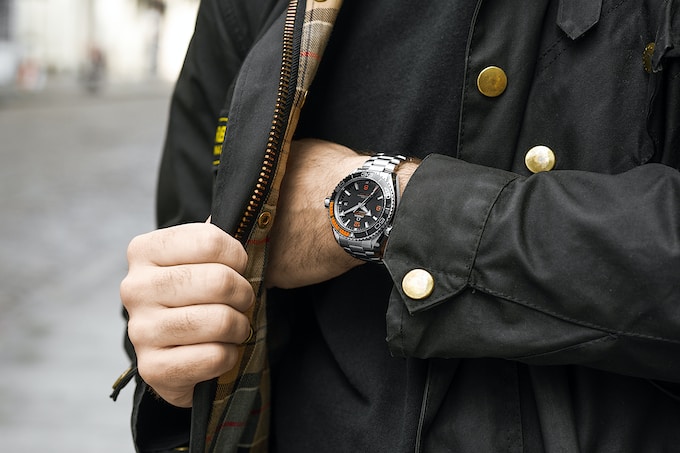 OMEGA used a first-of-its-kind, vulcanized rubber inlay to indicate the first 15 minutes of dive time in orange on the bezel of this Planet Ocean.

Since it first launched, OMEGA has prioritized the Planet Ocean when it comes to updating its watches with the company’s latest innovations. When the Planet Ocean was unveiled in 2005, it was the first OMEGA dive watch to use a movement equipped with the brand’s co-axial escapement (caliber 2500). And 11 years later, in 2016, OMEGA revealed that the latest Planet Ocean models would be the first OMEGA Seamasters to be certified as Master Chronometers. We won’t go into all the details of what makes the Master Chronometer designation so significant (you can learn more about the testing process here), but it does bear unique importance for a dive watch, especially considering OMEGA’s industry-leading anti-magnetism technology (each Planet Ocean is tested up to 15,000 gauss). 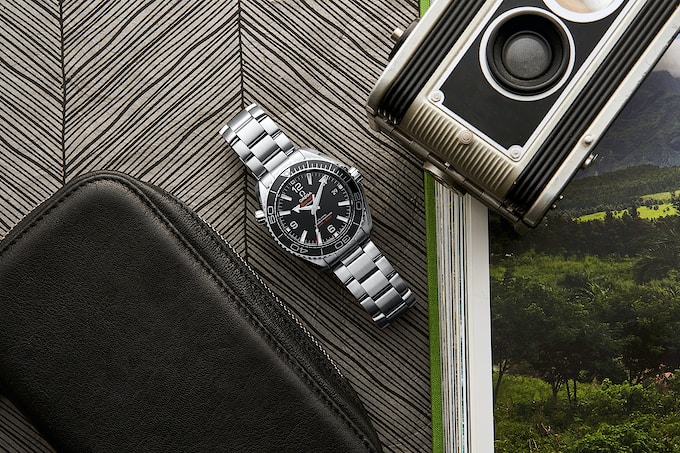 There are four standard OMEGA Seamaster Planet Ocean models available in the HODINKEE Shop today. Three of these are sized at 43.5mm, while one variant has a more moderate diameter of 39.5mm. All four watches have cases built from steel, with dials made of polished ceramic. The 120-click, coin-edged, unidirectional bezel sports a polished bezel insert that features a blend of ceramic and OMEGA’s proprietary Liquidmetal alloy (the Planet Ocean was the first OMEGA to utilize Liquidmetal when it was introduced in 2009). The date window is placed in a color-matched aperture at three o’clock, and an intermix of applied Arabic numerals and hour markers make up the rest of the timekeeping displays. OMEGA uses blue Super-LumiNova for the hour markers and hour hand, and green Super-LumiNova for the minute hand and bezel pip, in order to best track elapsed time underwater. Finally, one of the Planet Ocean’s defining attributes is the helium escape valve that protrudes from the case at 10 o’clock. 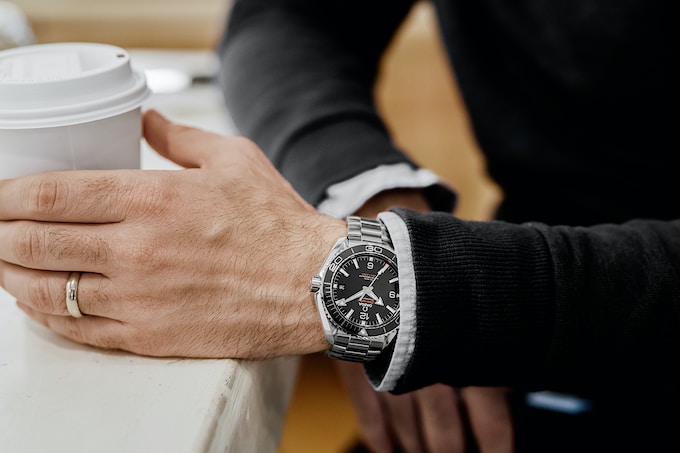 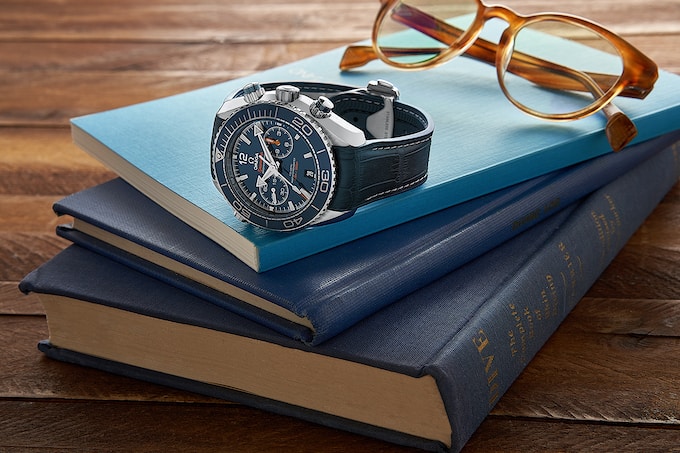 The dial of the watch features a pair of registers with concentric snailing. The sub-dial at three o’clock is stacked, tracking both elapsed hours and minutes; the sub-dial at nine o’clock indicates running seconds. One of our favorite subtle design details is the plongeur-style hour hand (similar to what you’ll find on OMEGA’s Ploprof dive watch) in the three o’clock sub-dial. A color-matched date aperture at three o’clock finishes the dial indications. With a stainless steel case, a polished blue ceramic dial, a ceramic and Liquidmetal bezel insert, and pushers that can be engaged all the way up to 600 meters underwater, the Seamaster Planet Ocean Chronograph offers the complete package, an all-in-one dive watch unlike any other. It’s priced at $8,350. 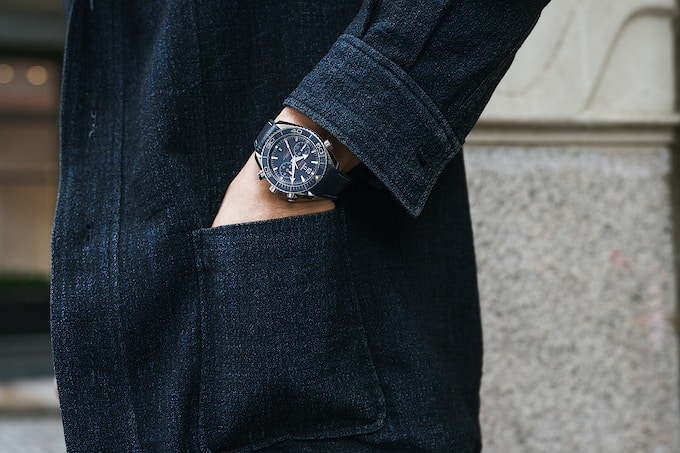 The Seamaster Planet Ocean Chronograph also served as the catalyst for OMEGA’s participation in Victor Vescovo’s record-setting dive. As HODINKEE detailed in its coverage at the time, Vescovo – after completing the Seven Summits mountaineering challenge – decided to attempt to visit the deepest spot in each of the five oceans, and to commemorate his new goal, he visited an OMEGA retailer in his hometown of Dallas to buy a Seamaster Planet Ocean Chronograph. After hearing about Vescovo’s purchase and his intention, OMEGA reached out with an offer to create something special, something record-breaking, for his upcoming excursions. And the result, thanks to Vescovo’s ambition and his choice of a Planet Ocean Chronograph, was the world’s deepest diving watch.

Alongside the chronograph, the GMT complication has been a natural extension of the Planet Ocean collection for years. First released in 2013, OMEGA updated the model in 2016 in this highly compelling black-and-white, stainless-steel design. The bidirectional – and bi-ceramic – 24-hour bezel operates as a second time zone display as well as a day-night indicator for the GMT hand. The bold contrast of the design works excellently, so much so that it invites the question of why black-and-white GMT designs aren’t more common. 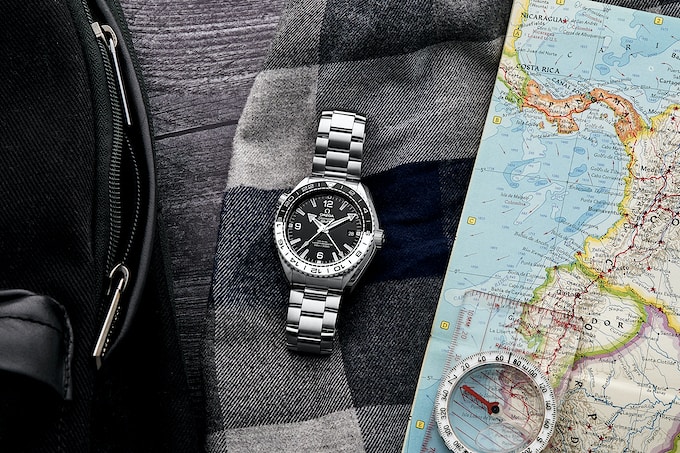 The monochromatic Planet Ocean GMT was the first OMEGA GMT outfitted with a Master Chronometer-certified movement, which OMEGA followed one year later in 2017 with the colorful Planet Ocean GMT “Big Blue” in ceramic. Where the 2016 release was eye-catching for its restrained use of color, the Big Blue puts color – specifically the familiar blue-and-orange design associated with the Planet Ocean since its beginning – at the forefront. Similar to the black ceramic case of the “Dark Side of the Moon” Speedmaster, the case of the Big Blue GMT is built from a single block of blue ceramic, a painstaking process that OMEGA has placed significant time and research into developing. 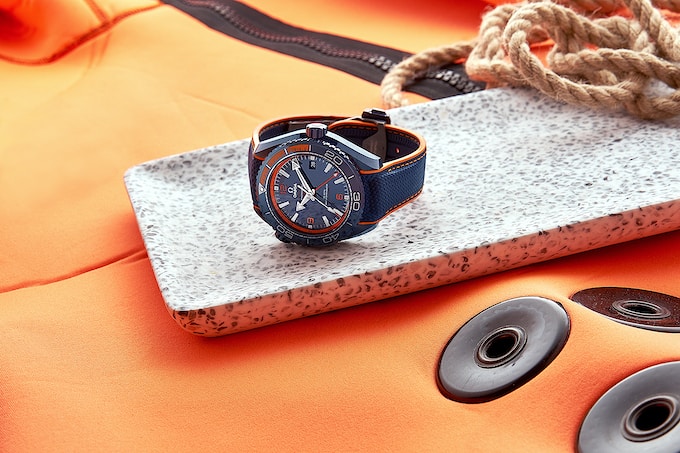 As one of the more premium expressions of the Planet Ocean design, OMEGA placed close attention to detail on the case finish of the Big Blue, with attractive polishing and brushing found throughout the watch’s entire structure. Additionally, OMEGA has used white gold for the hour markers and handset here and a unique mix of vulcanized rubber and Liquidmetal to fill the markers of the fully ceramic bezel. The bezel rotates unidirectionally, unlike the black-and-white Planet Ocean GMT, so OMEGA placed the 24-hour scale for the GMT hand in orange on the watch’s rehaut. The three o’clock crown, the helium release valve at 10 o’clock, and the buckle of the rubber strap are all built out of ceramic.

The use of Big Blue as the name of this GMT should be noteworthy for OMEGA enthusiasts. It references a 1973 Seamaster 120 dive watch chronograph, ref. 176.004, that has long been a favorite among collectors. In the early 1970s, this reference was a complicated diver positioned at the top level of OMEGA’s sport watches. And today, with the Planet Ocean Big Blue GMT, it feels like OMEGA is paying tribute to the Seamaster collection’s extensive history, with a dive watch that combines the brand’s most recent innovations in movement production, casework, and design. The OMEGA Seamaster Planet Ocean 600M GMT Big Blue in ceramic is priced at $11,700. 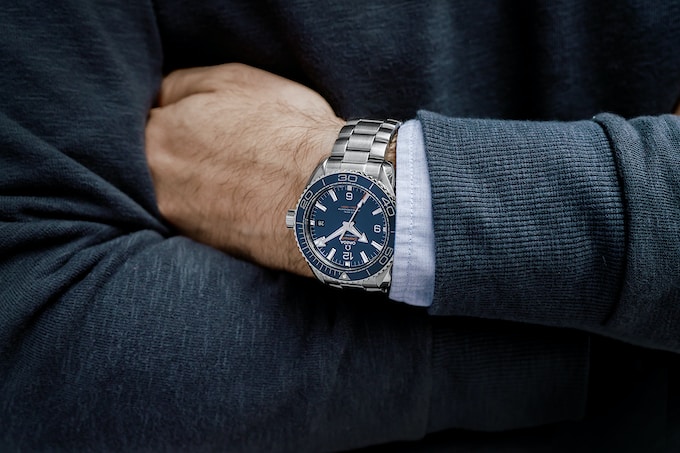 We’ve discussed the attributes of the Seamaster Diver 300M, the Seamaster 300, and the Seamaster Aqua Terra collections a countless number of times since we launched OMEGA in the HODINKEE Shop last November. And today, we’re excited to extend our representation of the core Seamaster families with these seven Planet Ocean dive watches. To explore our entire Seamaster collection and learn more about the Planet Ocean, click here.

A Week On The Wrist: The Cartier Tank Must 'SolarBeat'