How They Made It: Meet The Woman Mastering The Masters for Jaeger-LeCoultre

How They Made It: Meet The Woman Mastering The Masters for Jaeger-LeCoultre

For 90 years, the Jaeger-LeCoultre Reverso has been seducing fans with a hidden secret – the watch’s unmistakable art-deco dial flips over to reveal something unexpected on the reverse. There have been personal messages, family crests, and portraits of one’s beloved (we’ve seen anonymous paramours, pets, the family castle, you name it … ). And this year, to mark the Reverso’s 90th birthday, Jaeger-LeCoultre celebrates three works of modern art masters – Gustave Courbet, Vincent Van Gogh, and Gustav Klimt – that, fittingly, were believed to be lost and hidden away forever, only to be recently rediscovered. 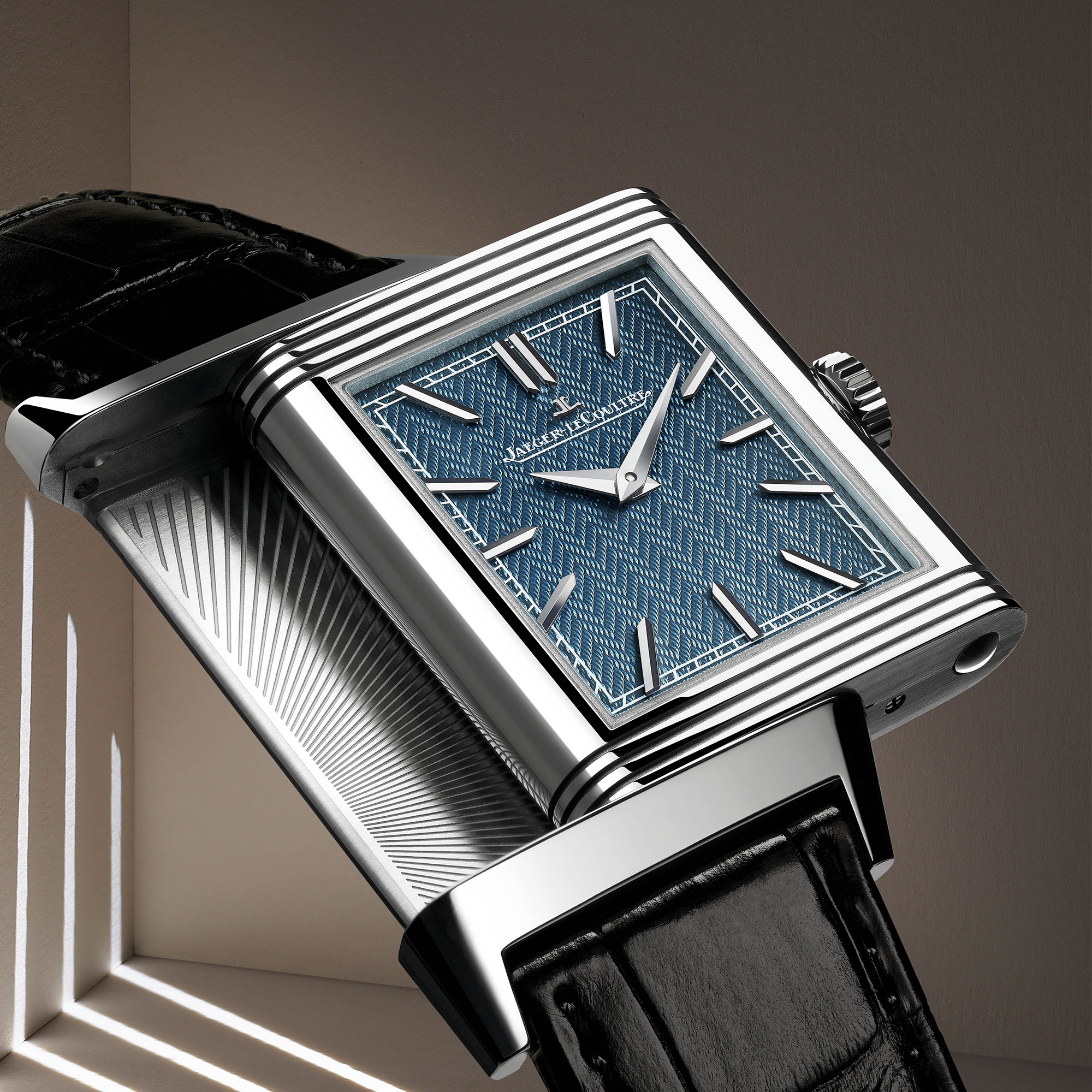 Gustave Courbet’s View of Lake Léman was painted in 1876 during the French artist’s forced exile in Switzerland, its stormy scene depicting the lake’s north shore and the Dents du Midi mountain range. Donated in 1892 to a local museum in Normandy, the Musée du Vieux Granville, the painting languished in the archives until 1945, when it was declared a forgery and shut into a storage locker. Only in 2015, after the museum curator sought to document the institution’s history, did the painting resurface again. In 2017, Courbet specialist Bruno Mottin finally authenticated the work as genuine. 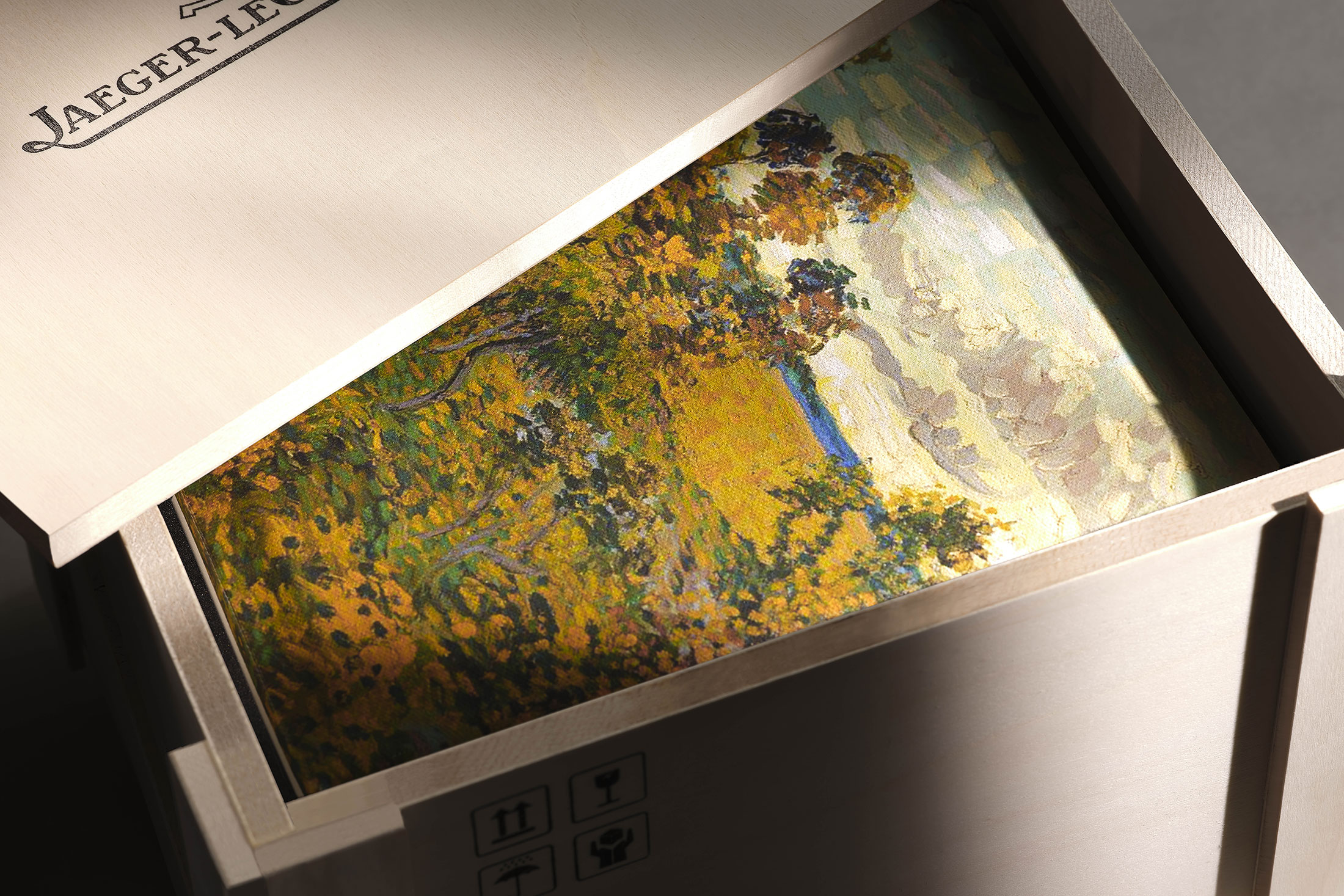 The intriguing tale behind the discovery of Gustav Klimt’s Portrait of a Lady (1917) is matched only by the underlying creation itself. The “double” portrait features two women, one hidden below the other: the first, painted around 1900, is Klimt’s muse who died prematurely. In the last year of his life, clearly still grieving her death, Klimt painted over the portrait with that of the lady we see today. With plenty of intrigue surrounding it, Portrait of a Lady has since had all the makings of an art-heist plot. It was stolen in 1997 from the Galleria d’Arte Moderna Ricci Oddi, in Piacenza, Italy, where it’d been hanging since 1925, ultimately believed damaged and lost forever. But in 2019, gardeners working on the gallery’s grounds found the painting sequestered among a wall of ivy, but – wait for it – in such fine condition as to suggest it had only been placed there recently. Today, its disappearance remains a mystery, if not a romantic one. Eugenio Gazzola, the gallery’s vice president, called the work “a treasure lost twice:” first with the original portrait hidden beneath and now lost forever, and second with the painting stolen and out of circulation for decades.

Vincent Van Gogh painted Sunset at Montmajour in Arles, in the south of France, in 1888 – an important period that also saw the artist create his iconic works, Sunflowers and The Bedroom. Van Gogh died two years later, with Sunset at Montmajour entering the collection of his brother. A Norwegian collector bought the painting in 1901, but it was soon declared a fake and banished to the collector’s attic. Its reputation as a fake endured well into the 1990s when the Van Gogh Museum rejected the painting. It wasn’t until 2011 and 2013, however – thanks to cutting-edge computer analysis, chemical tests, and X-rays – that the work was finally recognized as authentic, with one expert calling the painting a “once-in-a-lifetime discovery.” 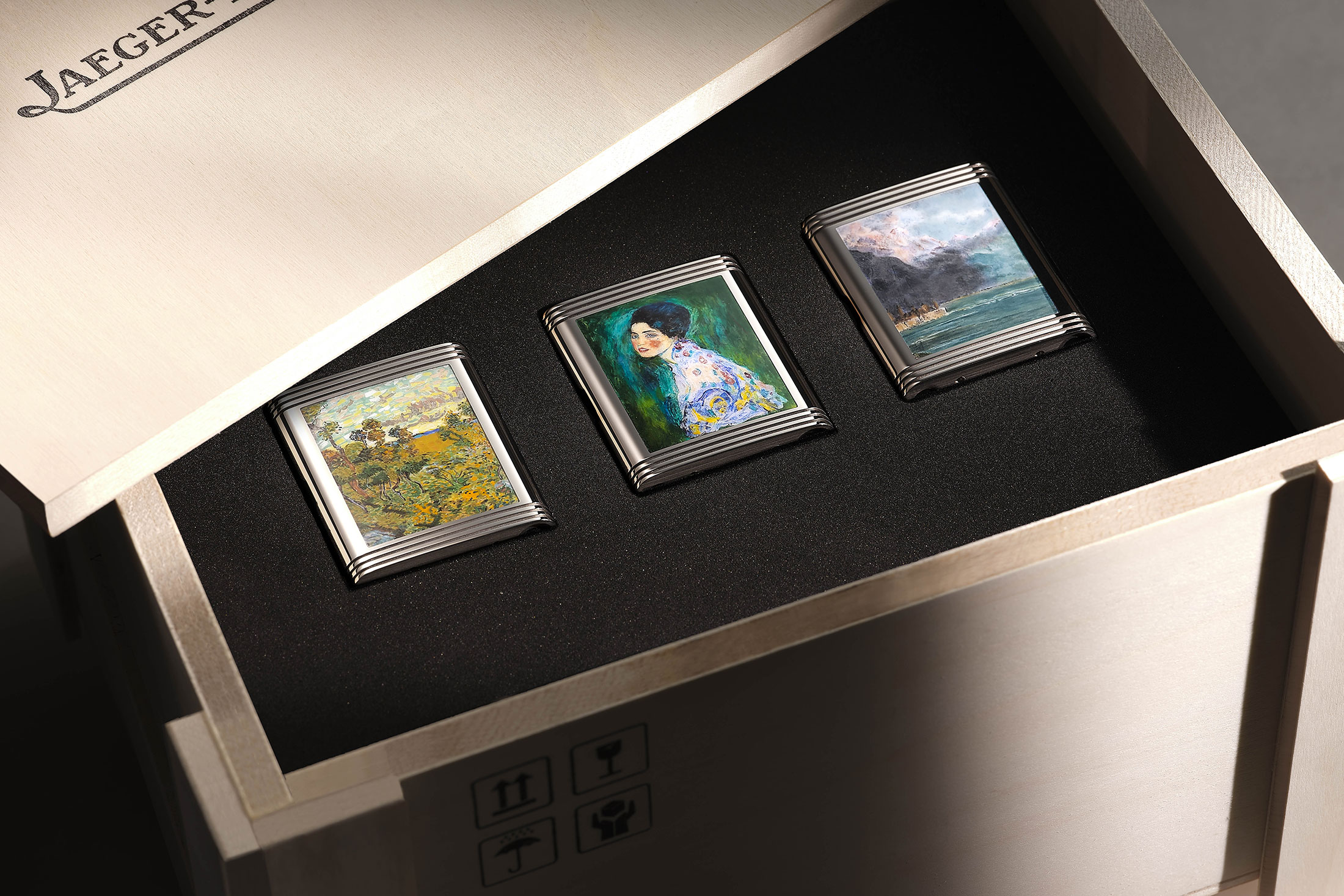 These three masterpieces have been reproduced by Jaeger-LeCoultre in a trio of watches called the Reverso Tribute Enamel Hidden Treasures – each one created using grand feu enamel and miniature painting, topped with guillochage on the dial. Doing justice to these works on a tiny watch face is master enameler Sophie Quenaon. She and her team of three enamelers at Jaeger-LeCoultre’s HQ in Switzerland’s Vallée de Joux spent months examining the artworks, first deciding on the final colors alongside the shape of the Reverso case for their canvas (they ultimately chose a smaller, more square form that closely echoes the specs of the original 1930s case). 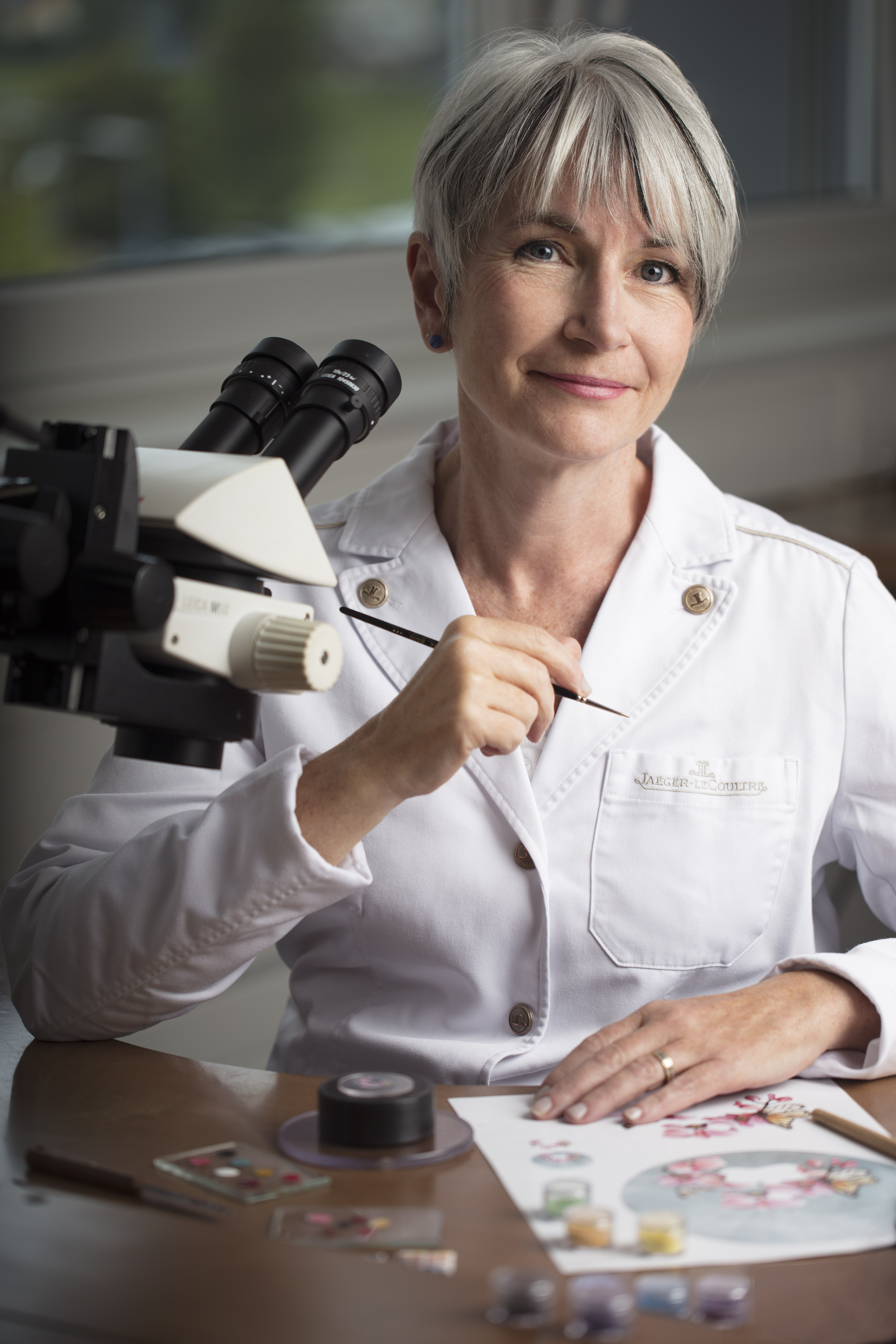 Quenaon has worked on Jaeger-LeCoultre’s most important enamel-painted pieces, including a pocket watch illustrating works by the art nouveau master Alfons Mucha, and depictions of Shakespeare’s Romeo and Juliet on minute repeaters, butView of Lake Léman was her first Courbet.

Armed with her palette of colors, Quenaon then went to view each of the paintings in the flesh, an experience that was both enlightening and emotional. The artwork showcased Courbet’s use of the palette knife technique, something that “when you see in reproduction, you don’t necessarily guess,” she says. “It has much more strength.” And while that sense of three-dimensionality can’t be reproduced on a watch dial, “you play with colors and shadow to try and get as close as possible to the effect of the original painting,” explained Quenaon, who adds: “Enameling can you give you so much more than an actual picture or photo because you can actually transport the person closer the original artwork.” 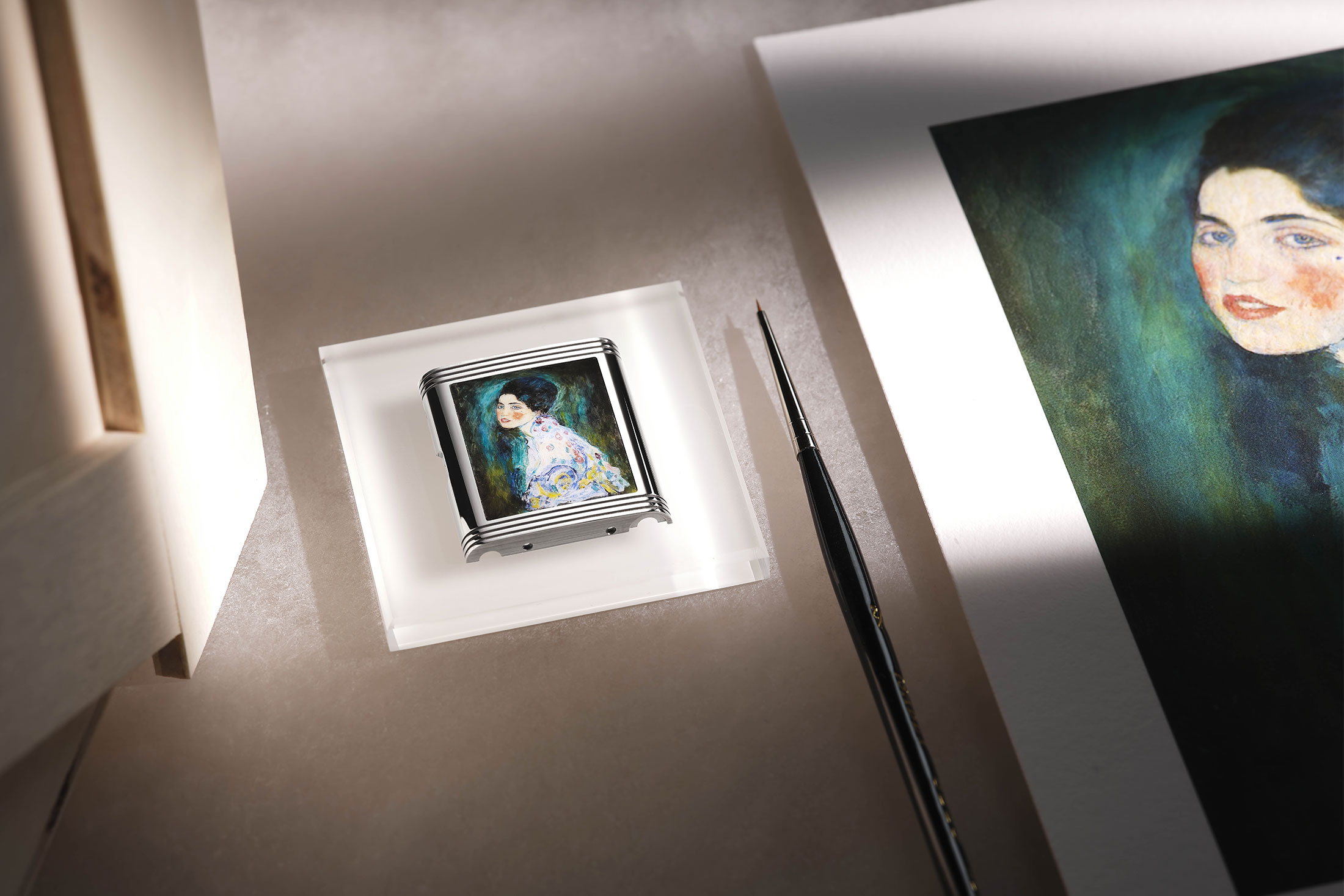 Portrait of a Lady was more of an emotional visit, says Quenaon, who admits that the first lady in the portrait had largely escaped her initially. Once standing in front of the original painting, however, she saw the first woman’s hat, cape, and dress (all since lost, the dress replaced with a floral shirt) – but what really struck her was the facial expression. “There is a presence,” explained Quenaon. “What is difficult to restore is the look, which is very important in a portrait. You have to be attentive to the expression of this woman – it’s the essence of the painting.”

It goes without saying that miniature painting requires painstaking skill and experience, with tiny, microscopic brushes, some consisting of only a single strand of hair. But speaking to Quenaon, it seems that the real challenge lies in getting colors and tones right – and all the underlying emotion, feeling, nuance, and intensity. They must echo the original but also reflect the artist’s technique – from Courbet’s palette knife to Van Gogh’s broad brushstrokes. But throw in the raw chemistry and physics of grand feu enameling, and you’re talking science as much as art. It’s no wonder that after nearly 30 years at Jaeger-LeCoultre, where she apprenticed with the self-taught Miklos Merczel (now retired) Quenaon is one of the best enamelers out there (she was previously an audio-prosthetic optician – yes, really). 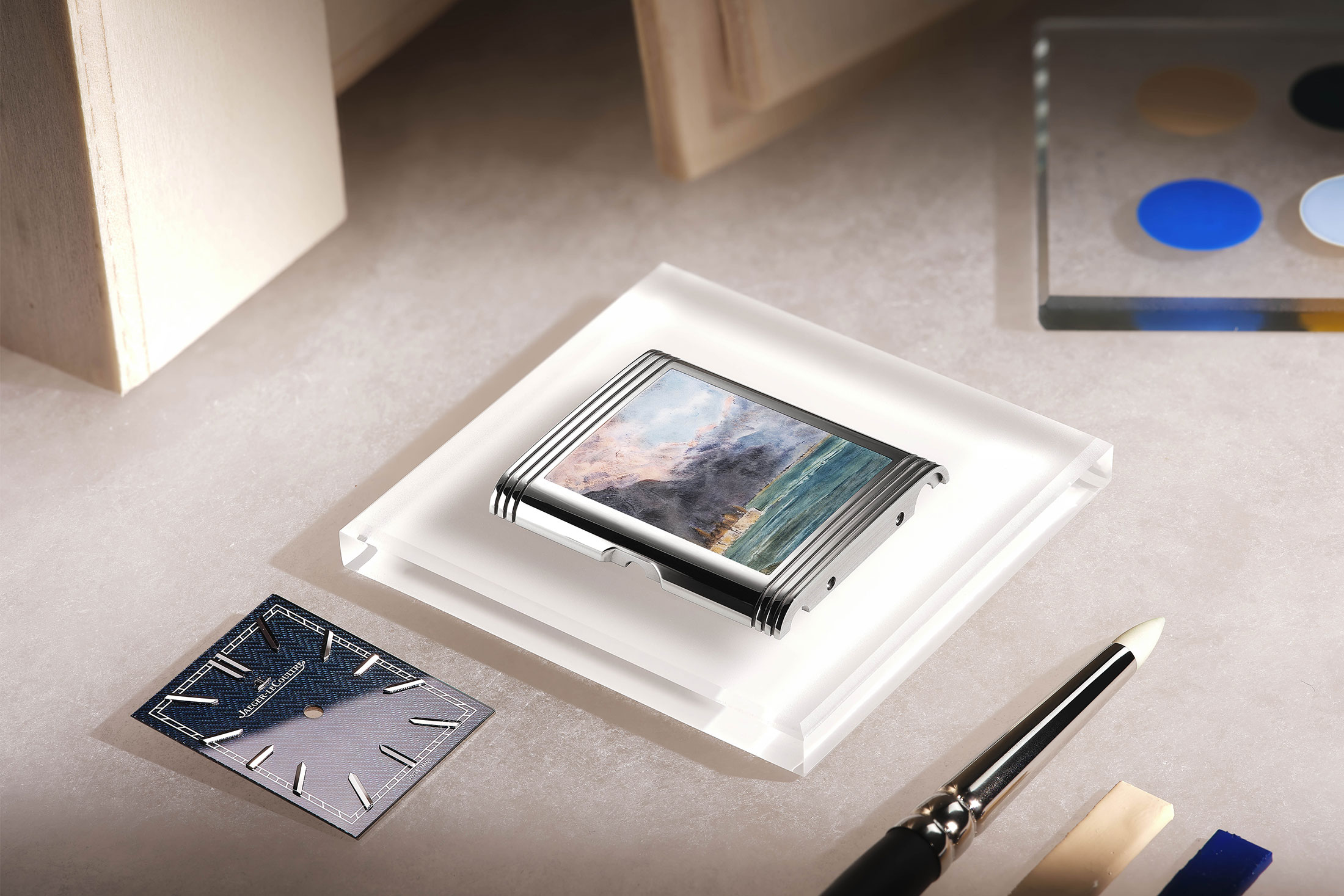 Quenaon works with around 20-25 basic colors, which are confected into the desired hue through a precise recipe of fine enamel powder, metallic oxides, and pine oil. But don’t expect to reach for your rules of primary colors here – this is enamel, and its own animal. Pink, for example, is one of the most difficult enamel shades to reproduce, and is nothing like simply mixing red and white. “In enameling, that actually makes it gray,” explains Quenaon, who has to first prepare the dial with a sheer enamel base, which adds additional complexity. “When you fire it, pink can completely disappear beneath the transparent enamel,” she says. “There was actually pink in all three paintings, so that was a challenge.”

Firings at intense 800°C heat not only change the color compositions, but can also cause them to run. “The colors can mix up so you have to work in different zones,” Quenaon says. “It’s complex and time-consuming.” All in all, some 15 to 20 firings are needed to achieve the desired hues – which is on top of the 15 or so firings at low temperatures of 200°C to dry the paint. Every single firing risks dial breakage, too, which means scrapping the whole thing and starting again. Each dial takes about two to three weeks to finish, with the Klimt as tricky as the Courbet. “They’re all complex in their own way,” Quenaone says. 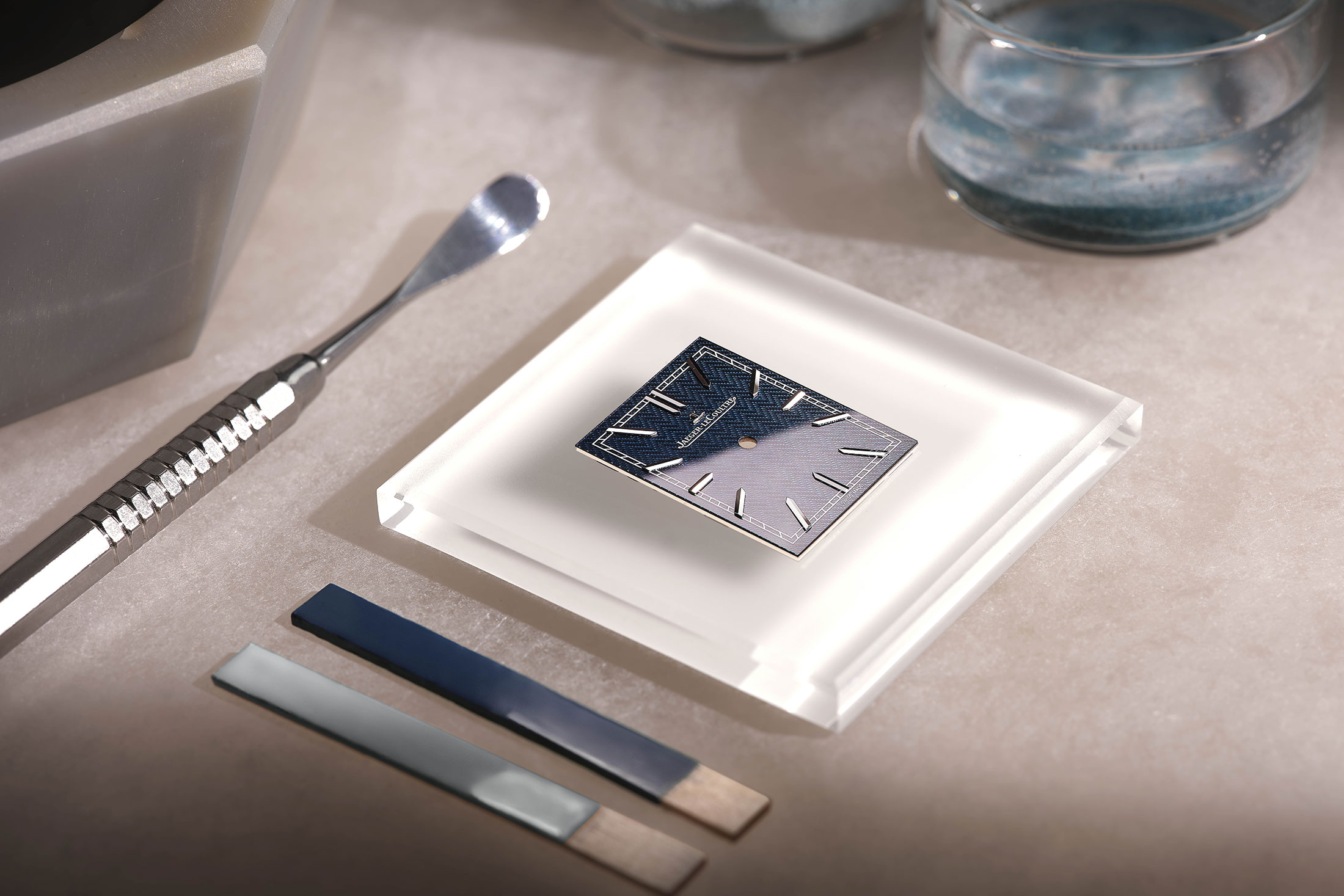 The watch dials themselves feature an eye-catching guillochage chevron pattern, in a gorgeous misty blue or green hue. It’s the first time Jaeger-LeCoultre has used the interlocking “W” motif on a Reverso, which is executed on century-old, hand-turned machines. Murielle Romand is the only person at the manufacture who can operate the devices, which she has been doing since 2015. Using a machine that creates straight lines for the chevron pattern, she says that “with each stroke, I move up a little, then go the other way, creating a zig-zag movement.” Romand reveals a very meticulous process that requires regular and precise calculations, adjustments, grooves, strokes – and patience in bucket loads. (She has a degree in micromechanics.)

Each dial takes around seven hours to create, given the right working conditions, that is. “I need to be extremely concentrated,” Romand says, “so I prefer to work on this pattern on Wednesdays, when there are less people, less noise.”

With so much time and care to create these watches, is it hard seeing them leave the manufacture? Quenaon admits that there is a deep personal and emotional attachment to the works. “You study them for so long and you really feel emotionally implicated in the whole process,” she says. “But it’s an accomplishment when finished. Seeing them go to someone else brings me great joy.”

Second Opinions: The Nine O'Clock Small Seconds Is A Rarity Worth Saving