Chronograph Vs. Dive Watch: Which Is More Practical For Real Life Timing?

Chronograph Vs. Dive Watch: Which Is More Practical For Real Life Timing?

Both were borne out of necessity, but is one really superior to the other in the rough and tumble real world?

The chronograph and the diver’s watch don’t generally have much in common, but the one element they do indisputably have in common is the function of measuring elapsed time. Each has advantages and disadvantages when it comes to performing this essential service and of course, each approaches the problem in different ways. Though the chronograph is often the first and only complication we think of when measuring elapsed time, it’s of course also true that this is in some respects, the defining feature of a dive watch. Today we’ll look at the pros and cons of both, in terms of every-day utility in the measurement of elapsed time in real life situations.

The Chronograph: Precise But Complicated 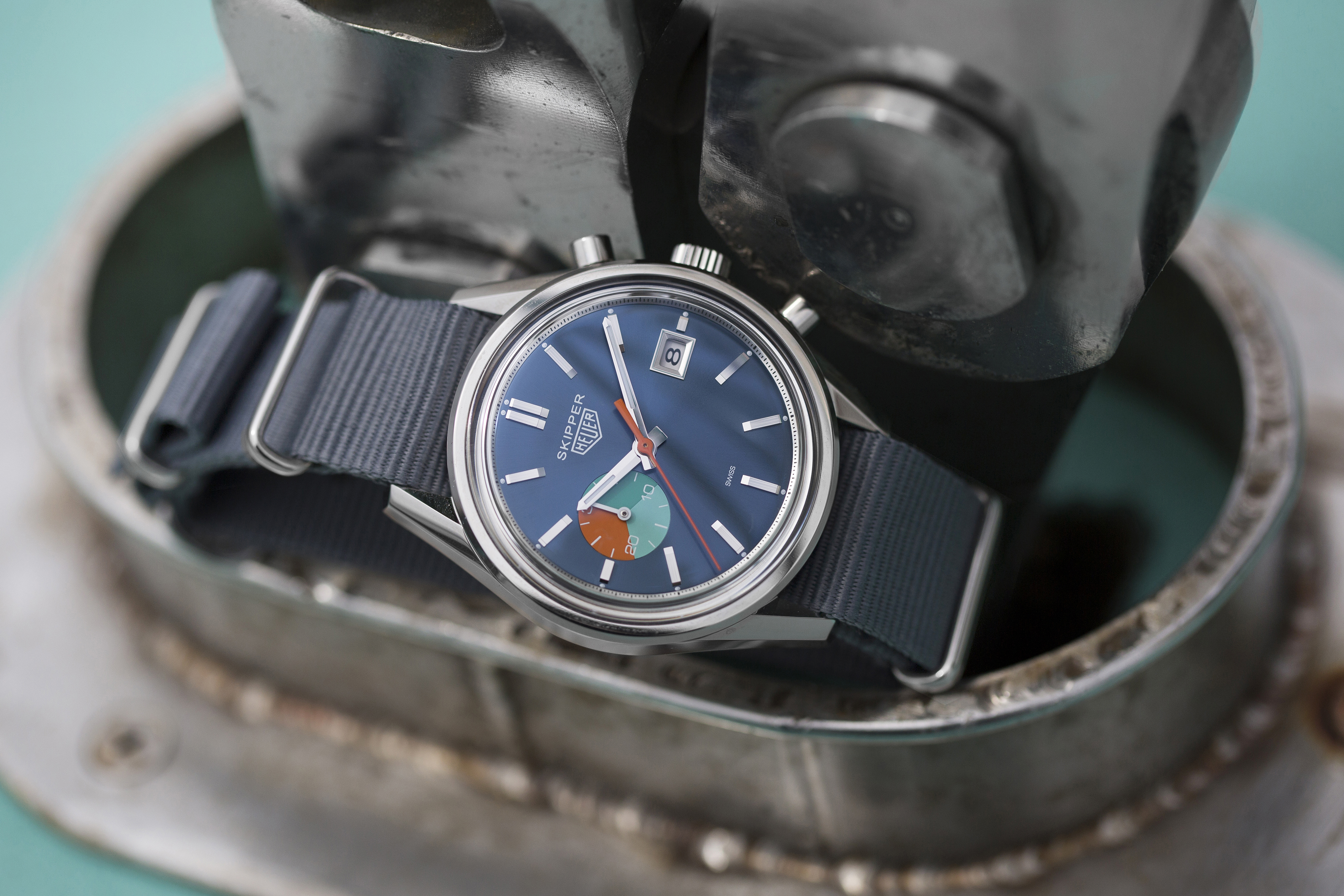 “The uses to which the chronograph can be put are almost legionary.”

There is no doubt that when it comes to precision measurement of elapsed time intervals, the chronograph is to be preferred to the elapsed-time bezel on the dive watch. Most chronographs have a center seconds register, as well as a sub-dial for showing elapsed minutes and elapsed hours (many of the earliest pocket chronographs had only a center elapsed seconds dial) and can measure elapsed time to a resolution of fractions of a second, limited only by the frequency of the balance.

Often, in the interests of a cleaner dial, chronographs will have only two sub-dials: one for showing elapsed minutes and the other showing the running seconds. The elapsed minutes sub-dial typically shows up to 30 minutes elapsed time but other intervals are not uncommon, with a 15 minute register offering better clarity for tracking five or ten minute start times in regatta timers (for instance). Forty five minute and even 60 minute registers can and have been made as well.

Because chronographs inherently offer better precision, they were once made to serve a wide range of purposes and often (though not always) these specialty chronographs had bezels designed to simplify the measurement of the frequency of certain events over time. In Complicated Watches And Their Repair, author Donald de Carle writes, “The uses to which the chronograph can be put are almost legionary. Various calculations are made and the dial calibrated so that the user himself has no need to make calculations; all he has to do is to select the chronograph with the dial to suit his purpose, ‘press the button,’ and the exact answer is shown on the dial.” 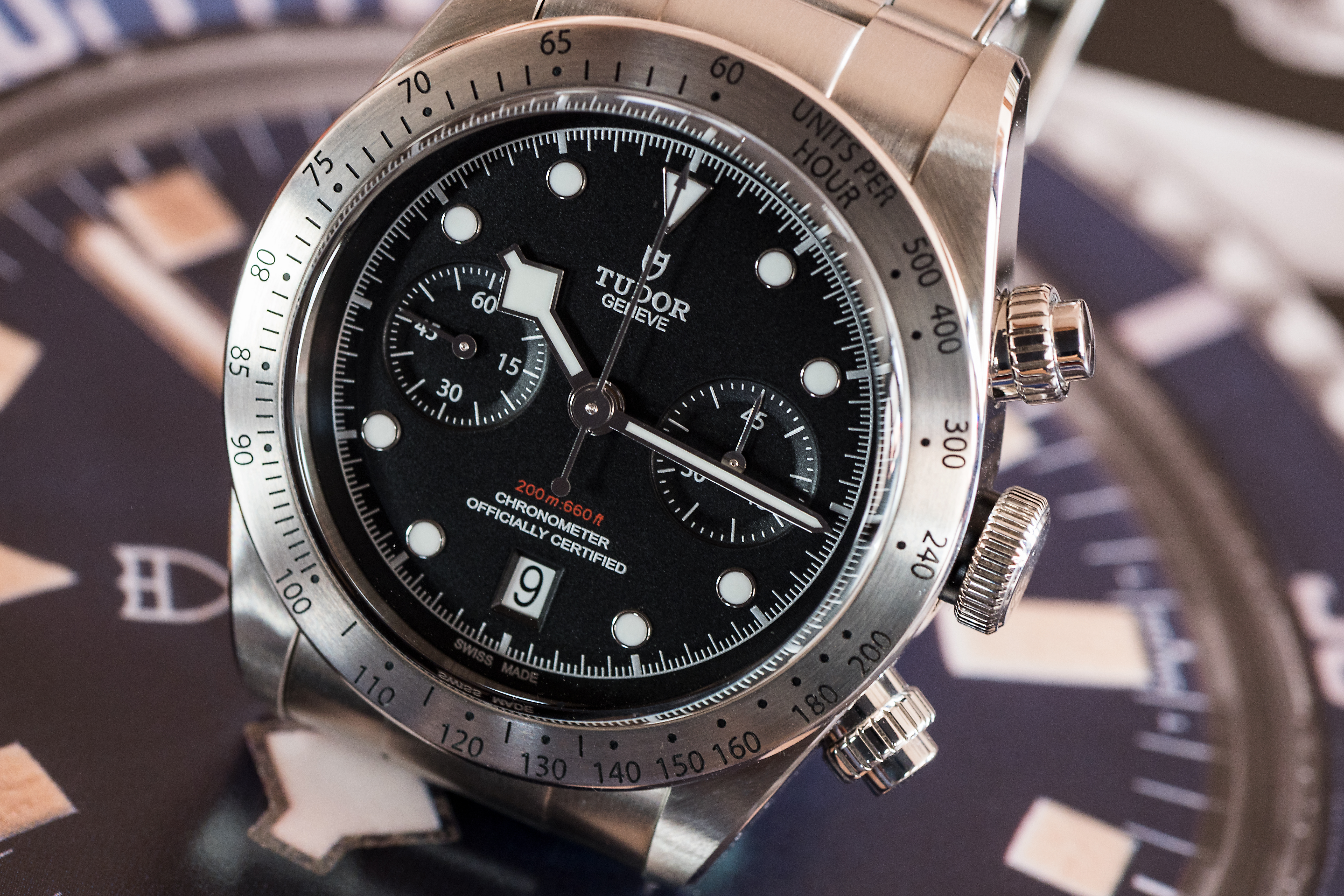 The tachymeter bezel or dial allows the measurement of average speed over a measured distance (usually a measured mile or kilometer) and is one of the most commonly seen bezels. This is, as the Brits would say, a rather singular thing, however. I cannot remember the last time I drove a car on a measured mile or kilometer and I would be willing to bet that for 99% of all chronograph owners the opportunity never comes up, and yet this very specific and, in general completely useless function, is probably the most widely seen on mechanical chronographs. It does lend a certain nostalgic charm, which is probably why it keeps turning up, but it offers little to nothing in terms of making even an occasional practical contribution to daily life. However the tachymeter bezel is traditional and people like them, so watch manufacturers keep making them. 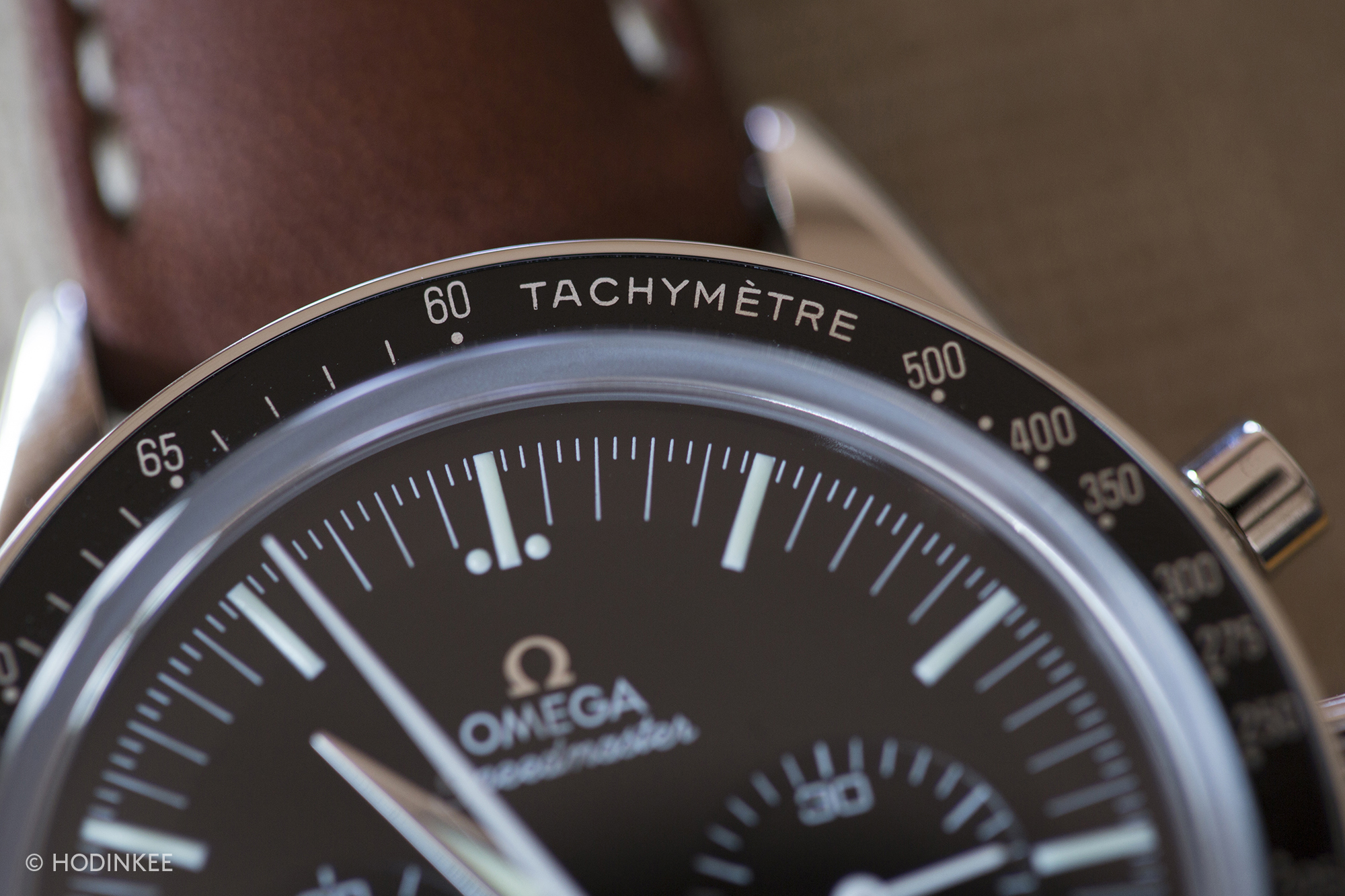 The tachymeter is far from the only chronograph scale that was invented with a view to practicality. De Carle mentions the “minute recording chronograph” which has three minute divisions “to time the length of telephone conversations.” There is the telemeter chronograph, which can tell you how far off an audible event is, by timing the difference between seeing the event, and hearing it. Two examples often cited are the distance to the observed flash of a gun (or fall of an artillery shell) and the distance to a thunderstorm based on the number of seconds between seeing the flash and hearing thunder. The telemeter seems to suppose that you either live in a combat zone or suffer from clinical astropophobia, but it’s still kind of fun. 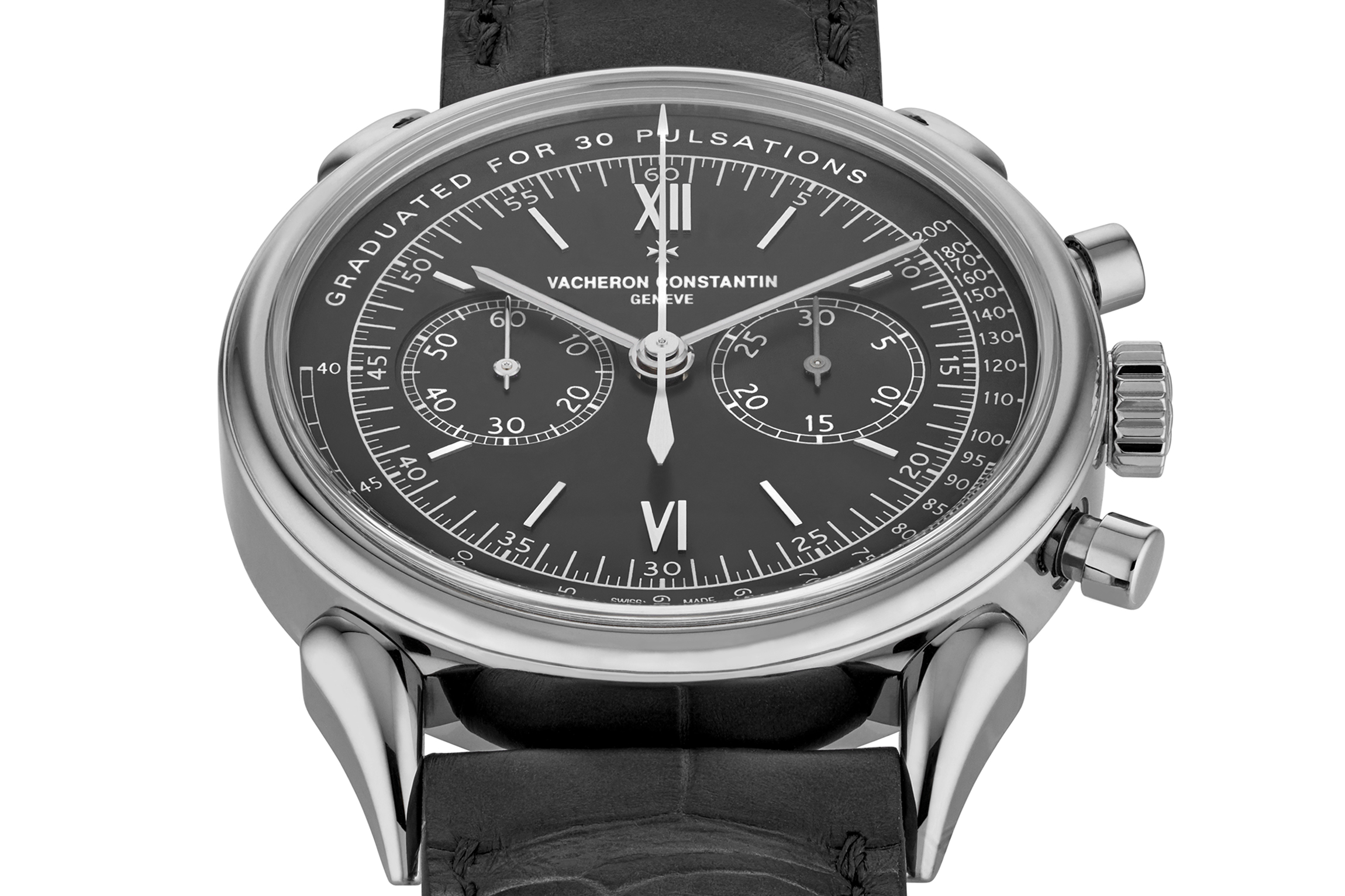 Chronographs are exact, versatile and fun, but they have a couple of disadvantages. The first is that, compared to the dive watch, the chronograph is a somewhat more delicate and even fussy mechanism.

Aside from the very exotic “thirds counting” chronograph made by Breguet’s contemporary, Louis Moinet, which was completed in 1816 and could measure intervals as short as 1/60th of a second, the earliest chronographs were inking chronographs, so-called because they left a drop of ink on the dial to show elapsed time. This unsatisfactorily messy solution was eventually overtaken by the 1862 patent of Adolph Nicole, who is generally recognized as the first to “display a really usable pocket watch that included all three functions needed for the second hand: starting, stopping, and returning,” (Gerd-R. Lang and Reinhard Meis, Chronograph Wristwatches).  With its large number of moving parts, and relative delicacy, the chronograph is also a more expensive solution than the dive watch. Though mass production and the invention of the cam-controlled chronograph have made them less expensive (and improved durability) their relatively higher cost and complexity are an undeniable downside.

The Dive Watch: Less Precise But Much Tougher 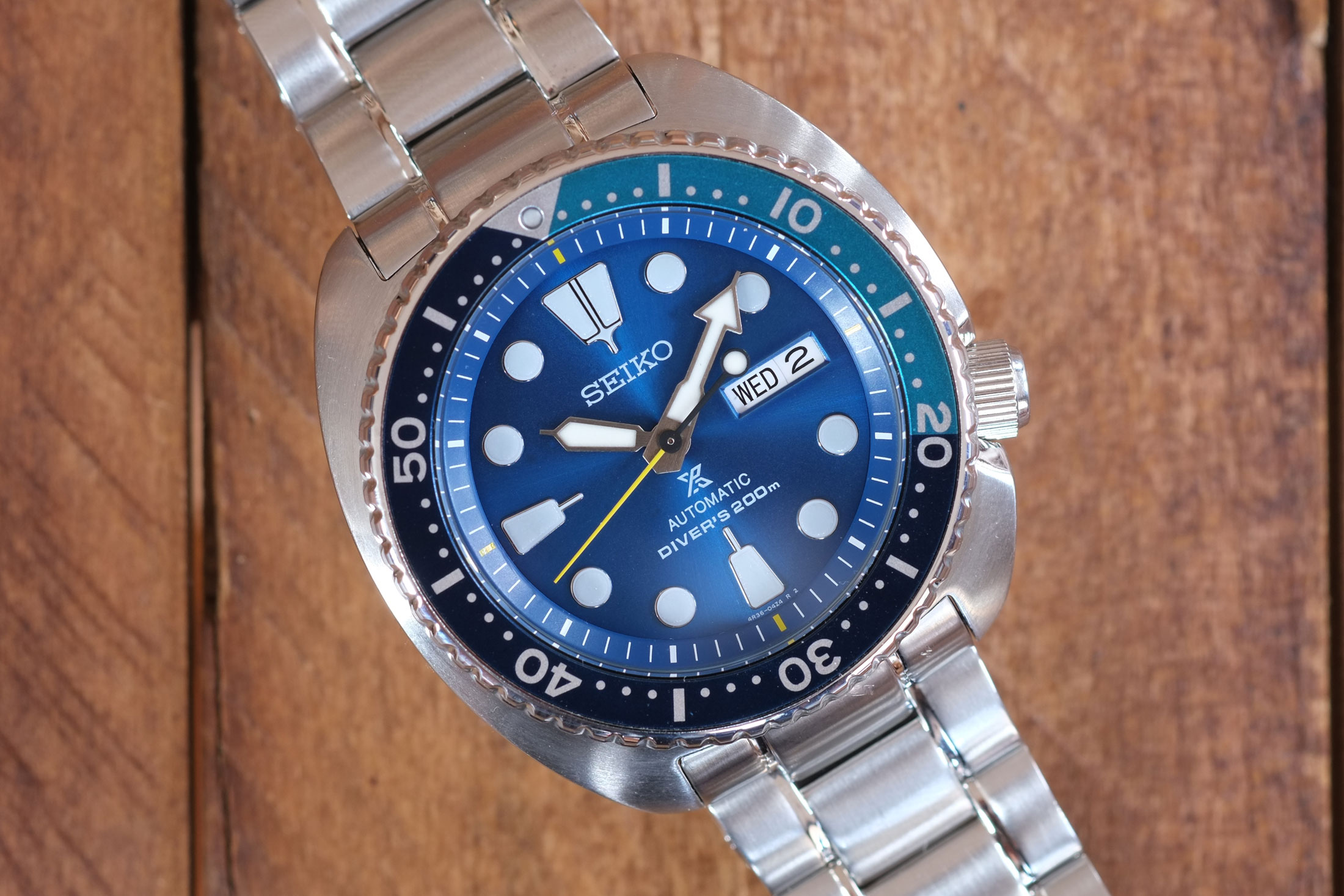 Now let’s turn to the diver’s watch. Unlike the chronograph, a diver’s watch must fit a set of standards which are outlined by ISO 6425. This international standard includes requirements for a minimum depth rating of 100 meters, a dial able to be read at 25 centimeters in total darkness, an antimagnetic rating of 4,800 A/m (amperes per meter) and several others – however, for our purposes the most relevant is the requirement for a unidirectional bezel, with a minimum of five minute interval markings.

The dive watch is a far simpler mechanism than the chronograph; indeed, the one-way bezel is generally not considered a complication at all. The reason for the requirement for a one-way bezel, is to ensure that when using the watch to time a dive, the bezel can’t be accidentally knocked out of position in a way that would show there is more time available than actually remains in the dive. Often the bezel is graduated with five minute markers, with the first fifteen minutes having individual minute markers as well. 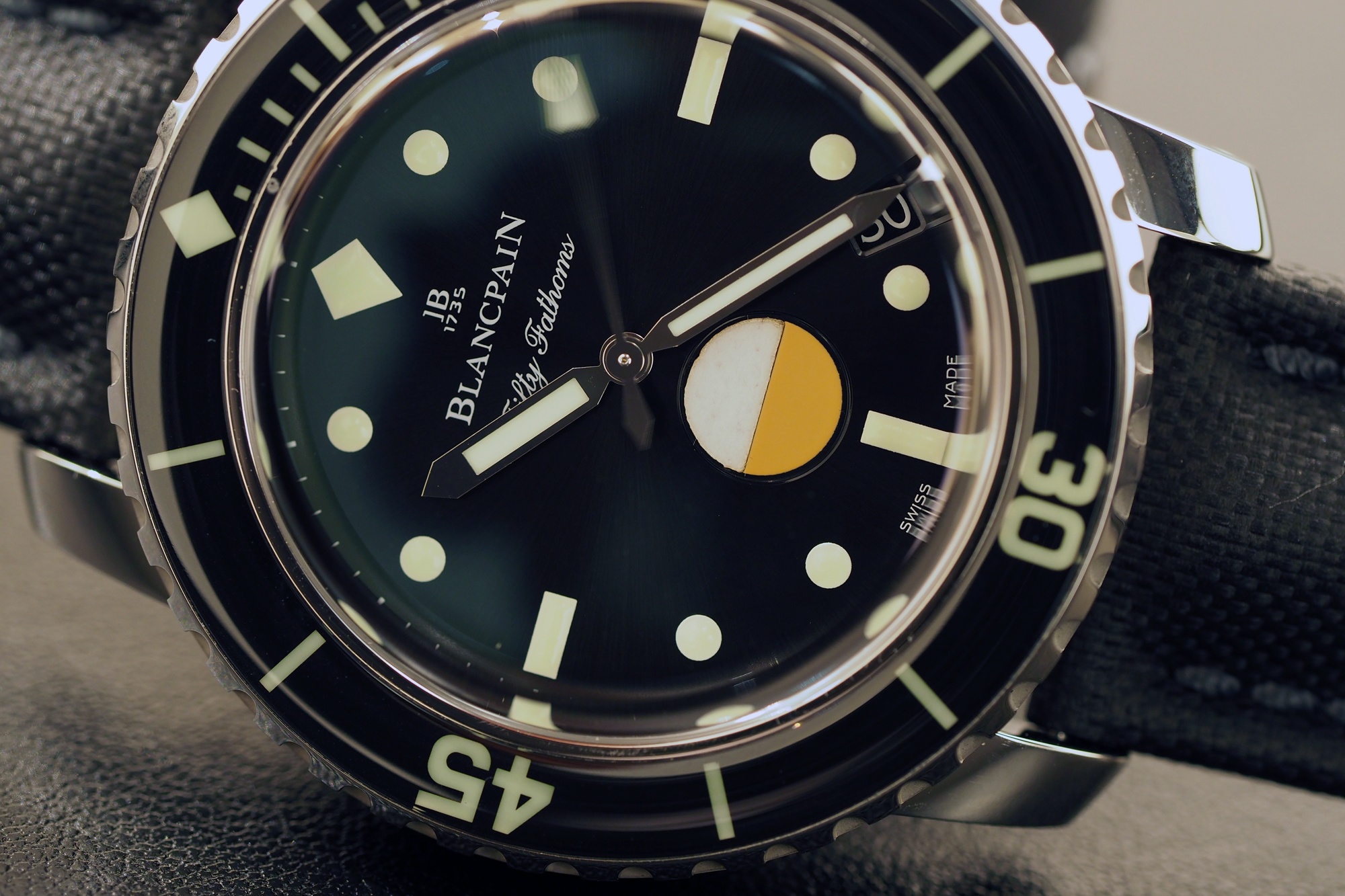 The fact that dive watches have technical requirements calling for generally better resistance to external disturbances than one finds in chronographs, means that they are typically more robust and of course, the elapsed time bezel is dramatically more fault-resistant than the chronograph mechanism.

They are also arguably more versatile. The bezel can be used to reliably time elapsed time intervals of up to an hour (an advantage over any two-register chronograph, although the advantage reverts to any chronograph with a 12 hour register as well) and read-off of elapsed time is quicker and easier as well; one only has to look at the position of the minute hand with respect to the bezel and one is instantly oriented with respect to elapsed time. In some chronographs it can happen that the hands obscure the sub-registers at certain times of day, so in absolute terms, dive watches offer, across the board, inherently better legibility as well. 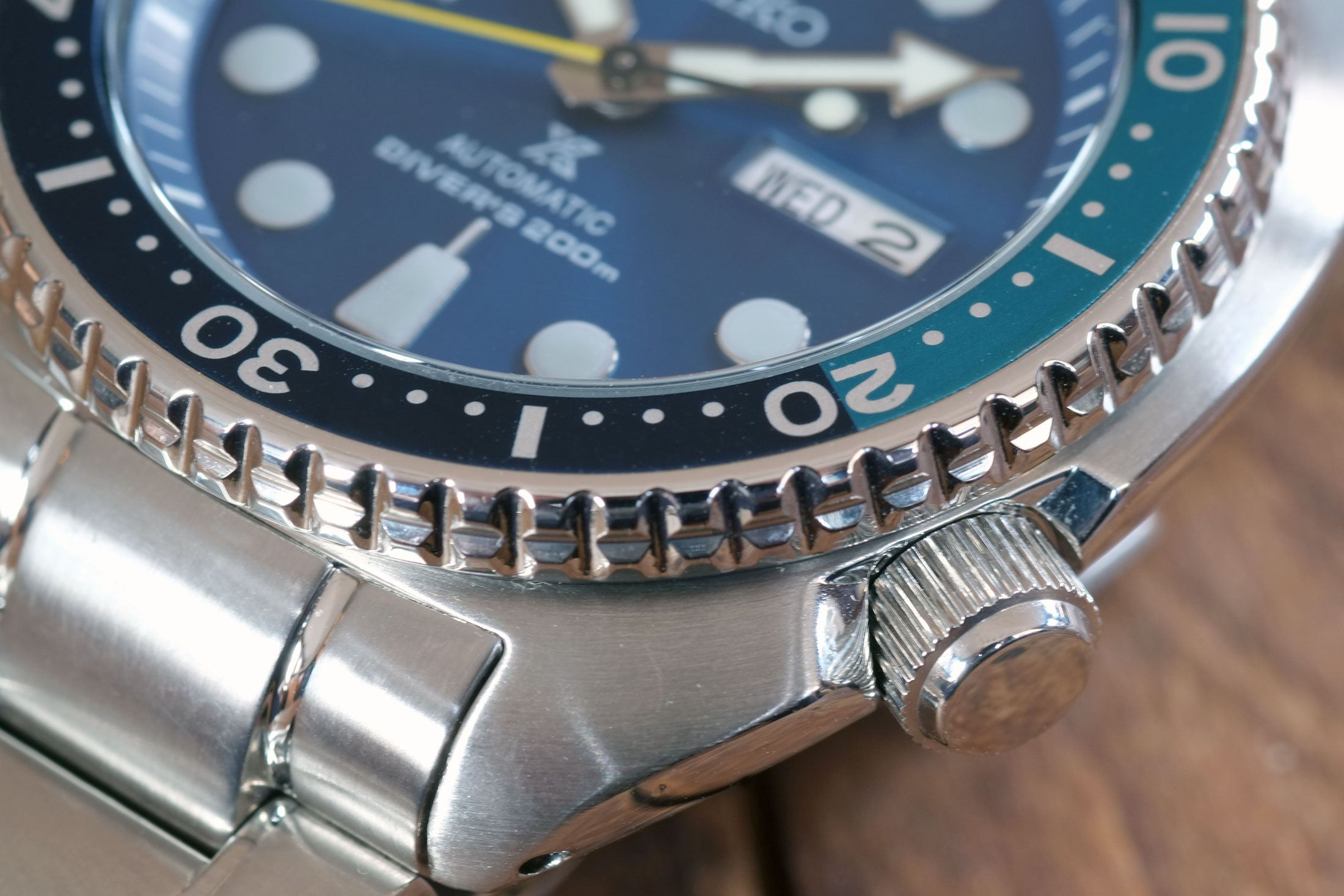 It is certainly true that the dive watch bezel is less precise than the chronograph, but this raises the question of why and when one would actually need the precision the chronograph offers. My own experience has been that with a bit of practice, elapsed time intervals can be read off to a precision of 10-15 seconds, depending on the watch. This presupposes that you have a bezel with accurate “clicks” that allow you to place the bezel accurately, and of course with a bezel with, say, 30 second increments you get better resolution if you start timing at either the start of any given minute, or at 30 seconds. However even without this caveat, for practical timing requirements for mundane events of daily life – things like cooking, or timing a dryer load, or seeing how long you’ve been sitting in that meeting – the timing resolution of a dive watch is more than adequate. A chronograph is simply more complex, more expensive overkill in 99% of such situations.

Who Does It Best?

However, and fortunately for watch lovers, practicality isn’t everything. While it’s true the dive watch may be the more practical of the two for most purposes, the chronograph has a specific kind of charm the dive watch does not. The fact that it can record elapsed time to such precise resolutions is precisely what makes the chronograph so interesting. To understand this we have only to look at the fascination we have with depth ratings in dive watches. No one but a technical or saturation diver is going to go deeper than 40 meters (the maximum depth for recreational scuba in most cases) but it’s also true that there is something inherently interesting about the technical achievement of a watch with a 500 or 1000 meter depth rating, which has nothing to do with practical necessity. 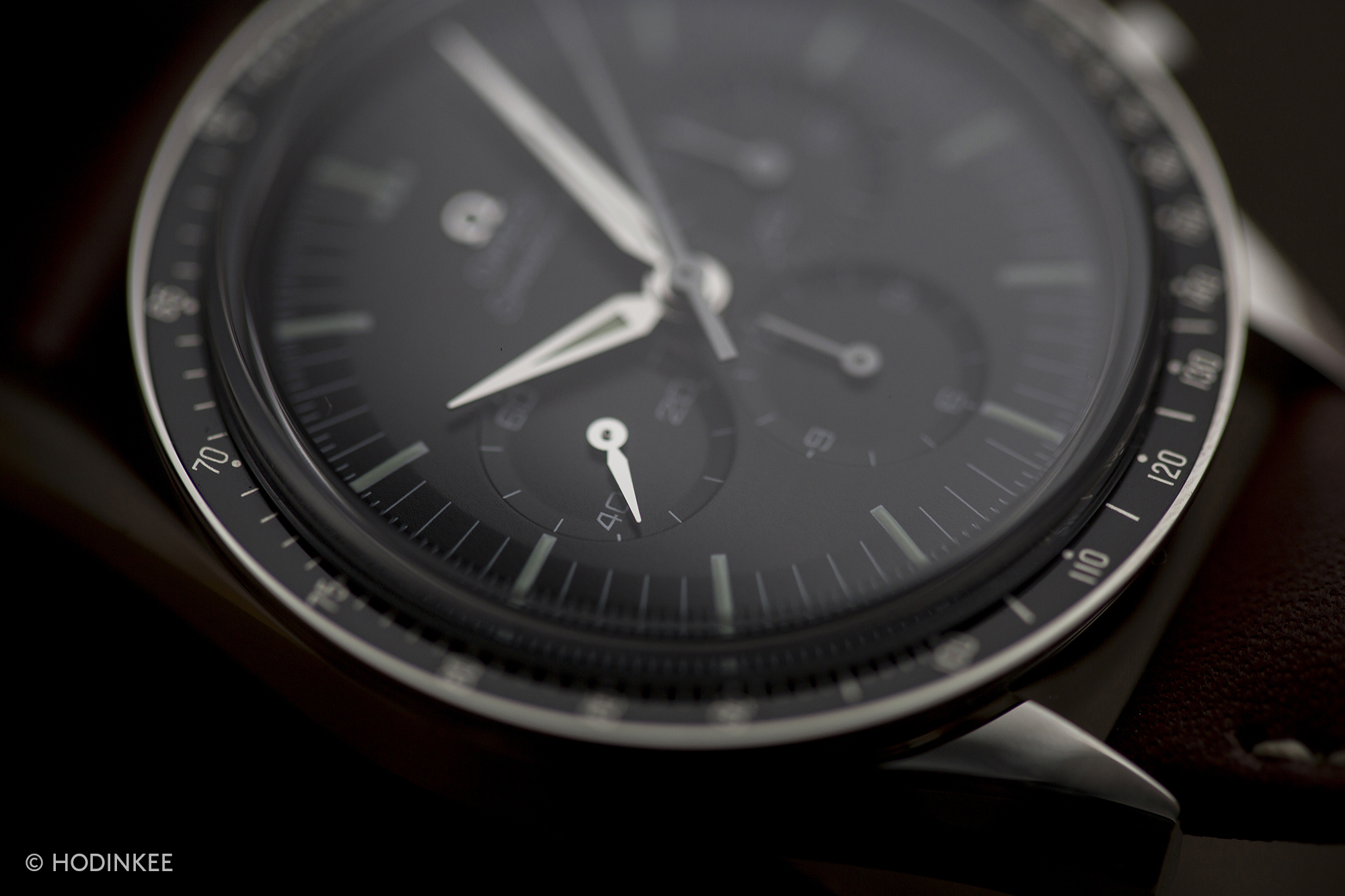 Why The Rolex GMT-Master Pepsi Is The Perfect Watch For Magnum P.I.