Explore OMEGA’s Unique Use of Ceramic

Explore OMEGA’s Unique Use of Ceramic

The ultimate expression of a Speedmaster, times three.

We’re updating the HODINKEE Shop today with a group of Speedmasters that represent OMEGA’s latest innovations in manufacturing technology. All three watches have cases made from a single block of high-tech ceramic that is the result of years of research and development for the Swiss brand. And when we say that these watches are made of a single block of ceramic, we mean it. The case, bezel, crown, and pushers are all built from a high-end alloy with a higher density than traditional ceramic that allows OMEGA to finish the cases with a more premium mix of finishes than what is typically found on ceramic.

The Speedmaster “Dark Side of the Moon” was a game-changing watch for OMEGA when it was announced in 2013. It was the first time OMEGA used a ceramic case for the Speedmaster, opening the door to new, high-end possibilities for the iconic chronograph. OMEGA followed its all-black act just one year later with the “Grey Side of the Moon,” which firmly established the ceramic-cased Speedmaster as a tentpole model within the expansive Speedmaster family. Since those two watches were revealed, OMEGA has slowly iterated on the concept, bringing new models to market with even more unconventional designs and materials. The three Speedmasters being added to the HODINKEE Shop today are all defined by their shared ceramic case, but they differ widely in execution, with aesthetic traits that vary from full-on blackouts to meteorite dials.

The OMEGA Speedmaster Moonwatch Chronograph 44.25mm “Dark Side Of The Moon” Apollo 8

OMEGA released this commemorative Dark Side of the Moon in 2018, 50 years after Apollo 8 became the second manned spaceflight in the Apollo program and the first to orbit the Moon. The men on board Apollo 8, including Command Module Pilot Jim Lovell Jr., were the first humans to see the far side of the Moon, which makes the Dark Side of the Moon – both figuratively and literally – the ideal watch to celebrate the achievement. However, the appeal of this watch runs far deeper than strictly its historical context, as OMEGA’s has executed it in an entirely unique way. 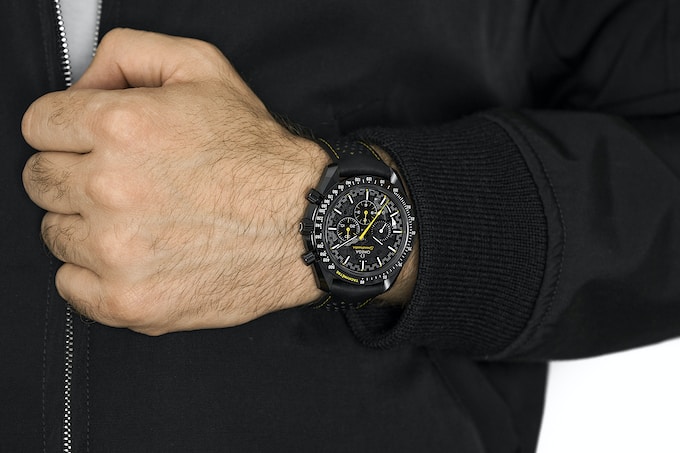 A few things become clear when comparing the Apollo 8 with the original Dark Side of the Moon. First, the Apollo 8 has no dial; instead, OMEGA openworked the front and back-facing elements of the watch and decorated most of what is visible on the bridges and mainplate with laser ablation to reveal a highly realistic, three-dimensional interpretation of the Moon’s topographic surface. OMEGA rendered the design in close detail – frequent stargazers might recognize the Sea of Serenity and the Sea of Rains located near the yellow Speedmaster script. It is one of the most intricate and thorough decorations ever applied to a Speedmaster and is highly rewarding to view under a loupe. 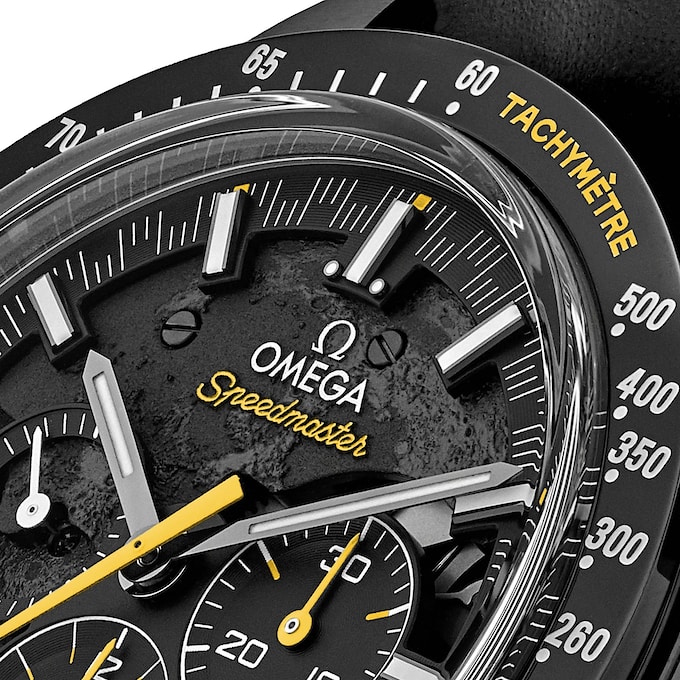 Second, the Apollo 8 has three chronograph sub-dials and no date, compared to the two registers and date found on all previous ceramic Speedmasters. Since the debut of the Dark Side of the Moon, OMEGA has outfitted its ceramic watches with its automatic caliber 9300 movement, but for the Apollo 8 edition, OMEGA went with its classic manually wound caliber 1861, whose history with the Speedmaster goes back decades. The caliber 1861 embodies the historic spirit of the Speedmaster, and in this decorated form, it has been given the name caliber 1869. This is the first time OMEGA has placed a manually wound movement in its modern ceramic range of timepieces, and its lack of rotor allows for an unobstructed view of the decorated movement through the sapphire exhibition caseback. The use of caliber 1861 rather than caliber 9300 results in a more wearable version of the Dark Side of the Moon, with a 13.8mm thickness, making it the thinnest ceramic Speedmaster yet, by 2.5mm. The case retains an identical diameter to previous models at 44.25mm. 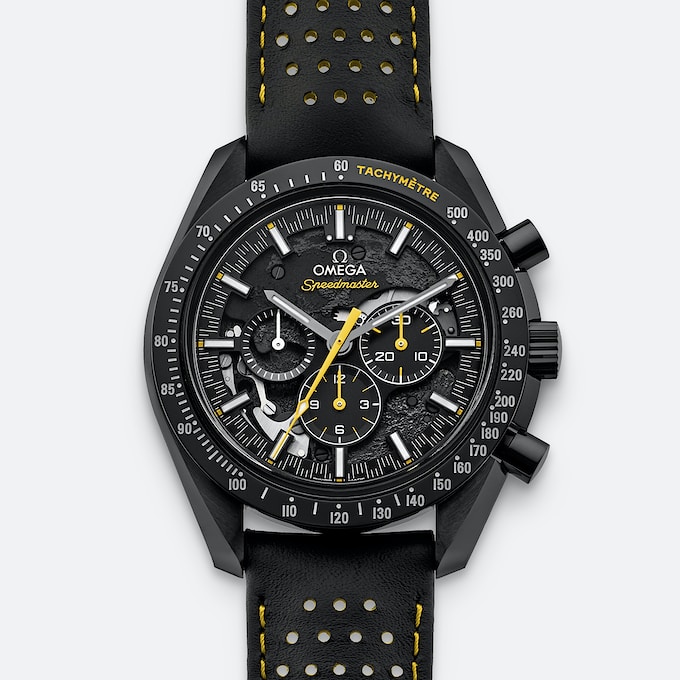 Other than the watch’s lunar decoration and choice of movement, the Apollo 8 features a fully lumed tachymeter scale and bright yellow accents on the dial with a checkered minute track that references the Speedmaster’s fan-favorite “racing dial” designs. The yellow accents offer excellent contrast against the Dark Side of the Moon motif and provide the watch with a welcome pop of color. The strap OMEGA has paired with the Apollo 8 is a perforated black leather racing strap with a yellow rubber interior that complements the overall look. There is one final reference to the Apollo 8 mission found on the watch’s caseback, an engraving of Jim Lovell’s famous quote, “We’ll see you on the other side,” stated just before the spacecraft dropped radio contact for 34 minutes while orbiting the far side of the Moon.

With the Dark Side of the Moon Apollo 8, OMEGA is bridging the gap between the old and the new by using its historic chronograph movement inside a high-tech ceramic case. The overall design is profoundly modern but also overflowing with nostalgia for the advent of the Space Age, a combination only OMEGA could execute to this degree. All in all, it is one of the most visually and thematically compelling Speedmaster designs in recent memory, and it’s available right now in the HODINKEE Shop for $9,750.

The first Dark Side of the Moon was an unsurprising hit for OMEGA upon its release. It broke with Speedmaster tradition and offered a new and highly contemporary take on one of the most well-known watches ever built. Two years after its release, OMEGA introduced a small collection of timepieces that carefully updated the design platform the original watch had established. One model, which OMEGA named the Black Black, took the Dark Side of the Moon’s successful formula even further. 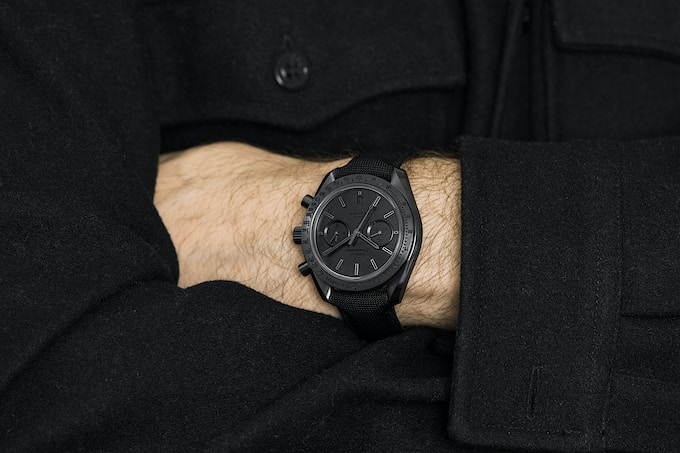 The OMEGA Speedmaster Moonwatch Co-Axial Chronograph “Dark Side of the Moon” Black Black features an identical polished and brushed black ceramic case, with the same dial layout as the original watch that comes courtesy of caliber 9300. The difference with the Black Black is that OMEGA took the contrasting elements of the original design (like the handset, hour markers, and date) and coated them entirely to match the color of the rest of the watch – even the bezel’s tachymeter scale is now filled with black lacquer. The applied hour markers and three-dimensional sub-dials offer an interesting play of light and shadow that helps define the watch’s overall visual appeal. 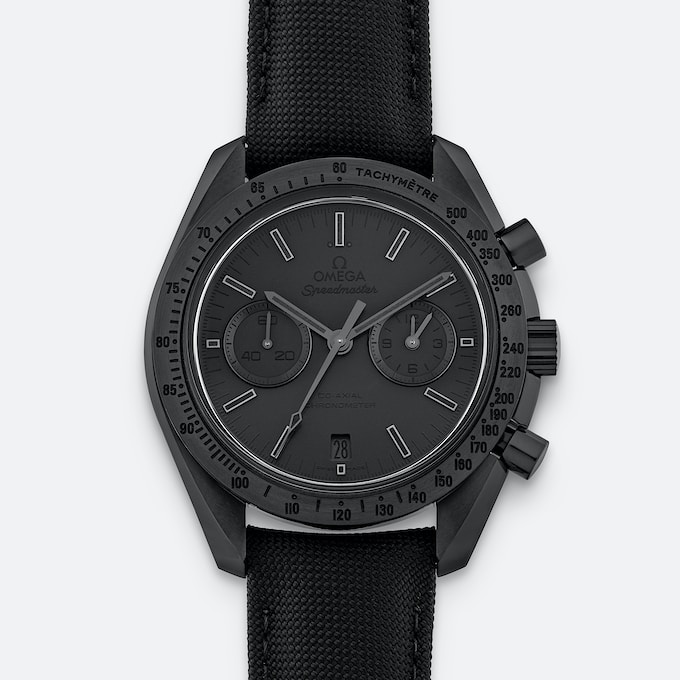 The reductive nature of the Black Black’s design is quite compelling; it is a tactical and under-the-radar interpretation of the Speedmaster design that pushes the watch even further into uncharted territory. The Dark Side of the Moon Black Black shares identical pricing with its 2013 predecessor, at $12,000.

The OMEGA Speedmaster Moonwatch Co-Axial Chronograph 44.25mm “Grey Side Of The Moon” With Meteorite Dial

With a grey ceramic case and a sandblasted platinum dial, OMEGA’s first Moonwatch Co-Axial Chronograph “Grey Side of the Moon” was an explicit nod confirming the Speedmaster’s new high-end direction upon its release. And, in 2016, OMEGA took another step in that direction by incorporating a dial made of meteorite with Sedna gold accents. 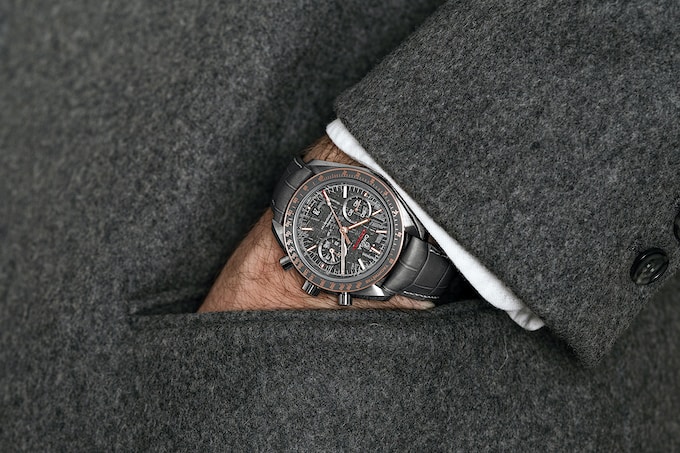 Speedmaster Moonwatch Co-Axial Chronograph 44.25mm ‘Grey Side Of The Moon’ With Meteorite Dial

Meteorite dials are most frequently recognized for their unique Widmanstätten patterns, which are the unique striations and detailing on the dial of this Grey Side of the Moon. The crystalline patterns form on the meteorite as the result of a treatment exposing the nickel-iron crystals found inside the metal. In addition to the meteorite dial, OMEGA uses its proprietary gold alloy, Sedna gold, to create the watch’s handset and applied hour markers. The bezel is made of Ceragold, a sintered composite of ceramic and Sedna gold. The use of gold on the watch offers an added bit of readability against the tonal grey design, and the combination of it with the meteorite dial really harmonizes quite well, especially when viewed in natural light. 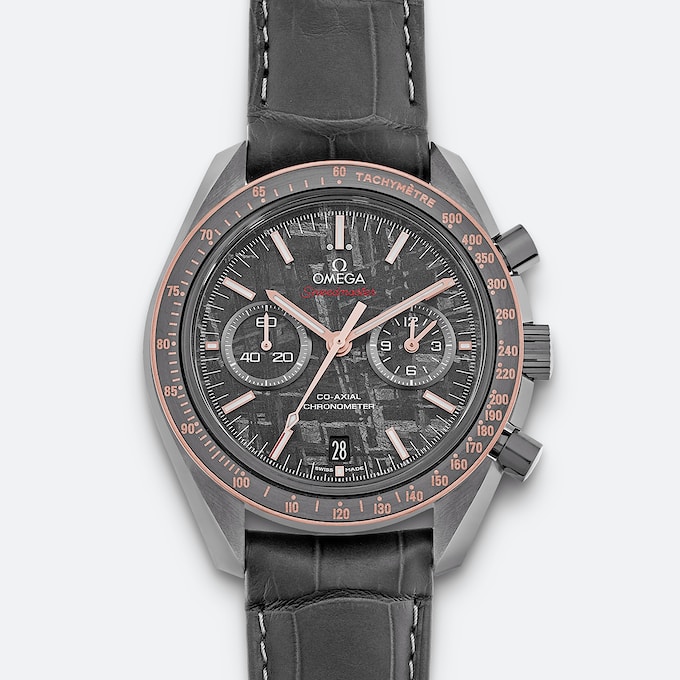 Speedmaster Moonwatch Co-Axial Chronograph 44.25mm ‘Grey Side Of The Moon’ With Meteorite Dial